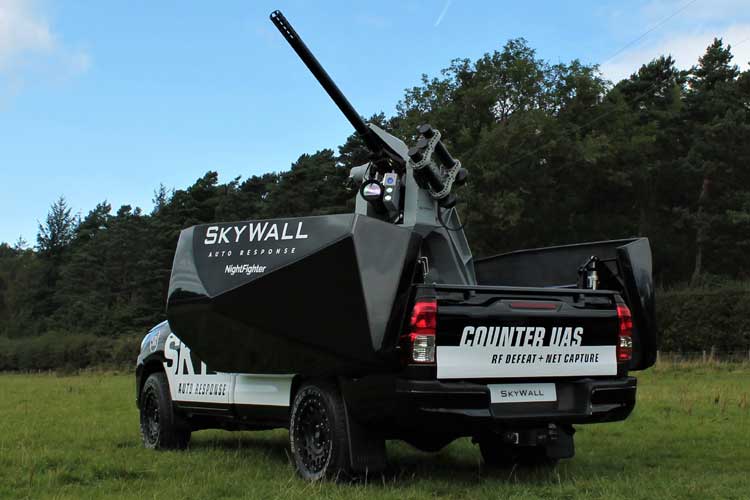 OpenWorks and SteelRock are introducing the first combined vehicle-mounted Net Capture and RF Defeat system at DSEI 2019 in London this week.

Visually similar to a typical commercial vehicle, the drone defeat system is strategically hidden under rapidly deployable covers, ensuring the system remains discreet when not in use. When a drone threat has been detected, the vehicle can be manoeuvred quickly to defeat the target drone using SteelRock’s industry-leading NightFighter RF-based effector technology or the SkyWall net capture system.

The system is based on the SkyWall Auto Response vehicle, developed by OpenWorks and their technology partner, Antmicro. The technology has previously been tested and proven in static installations at high-profile military evaluations and is capable of capturing fast moving multi-rotor (quad) or fixed-wing drones.

James Cross, Director of OpenWorks Engineering commented: “Our SkyWall100 handheld capture system has been used in conjunction with drone jamming systems for years and we’ve always wanted to integrate our SkyWall net capture technology directly with a radio frequency defeat system. Combined with SteelRock’s NightFighter, we offer the most robust defeat system available on the market.”

“The threat posed by Unmanned Aerial Vehicles (UAVs) to public safety and the security of civilian, commercial and military assets is increasing in its scale and sophistication” stated Rupert English, CEO and Founder of SteelRock Technologies. “We are delighted to partner with OpenWorks and provide operators with a powerful new hard-kill and soft-kill capability in an integrated mobile platform.”

The Counter-Drone Response Vehicle will be on display at DSEI 2019, at ExCeL London, as the system is formally launched to the world. OpenWorks launched the handheld capture system SkyWall100 in 2016 and has since delivered systems to law enforcement and military customers around the world. The NightFighter C-UAV system from SteelRock was introduced at DSEI 2017, and is currently deployed in military, law enforcement and civil protection roles in multiple jurisdictions.