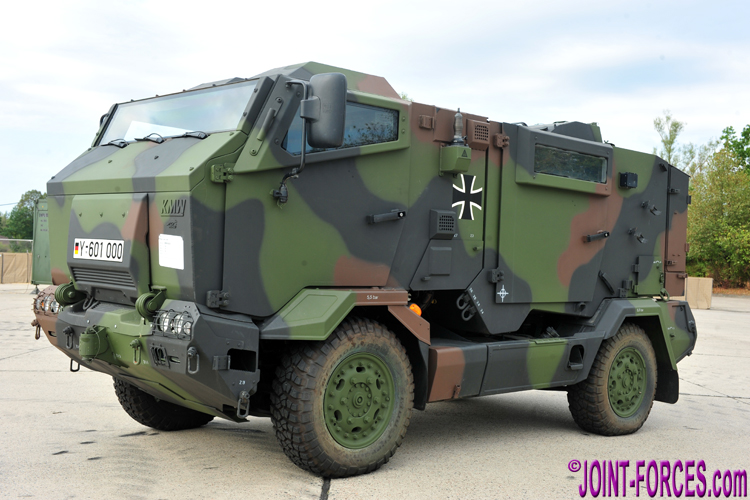 The N/C Recce variant of the Mungo vehicle is able to detect and identify nuclear and chemical threats. For that, the three-man crew has at its disposal a mass spectrometer, weather sensors and a radiation detection device, among other things. The crew remains inside the secure vehicle throughout the entire detection and analysis process. The ground can even be marked from inside the vehicle in the event of contamination. The Mungo N/C Recce can be transported in a CH-53 helicopter due to its light weight and external dimensions. All nine vehicles will be delivered by the end of 2022.

Editor’s Note: In 2009 Germany’s Bundeswehr tasked KMW with developing the Mungo 3 A/C – Spür (Detector) Nuclear and Chemical (N/C) Reconnaissance Vehicle and ordered a prototype based on the Mungo 3 GFF1 Variante Großraum. This prototype was delivered in June 2010 and over the next three years intensively trialled at the NBC Defence and Self-Protection School in Sonthofen, the Institute for NBC Protection Technology in Munster, and the School for Land-Based Technology and Maintenance in Aachen. Results of these trials were evaluated and requirements for changes were issued to establish a series production standard, resulting in today’s contract for procurement of nine vehicle. The new Mungo A/C – Spür vehicles will be used by the Light NBC Defence Company of ABC-Abwehrbataillon 750 in situations where their larger Transportpanzer 1 A8A7 Spürfuchs NBC Reconnaissance Vehicles cannot be employed.