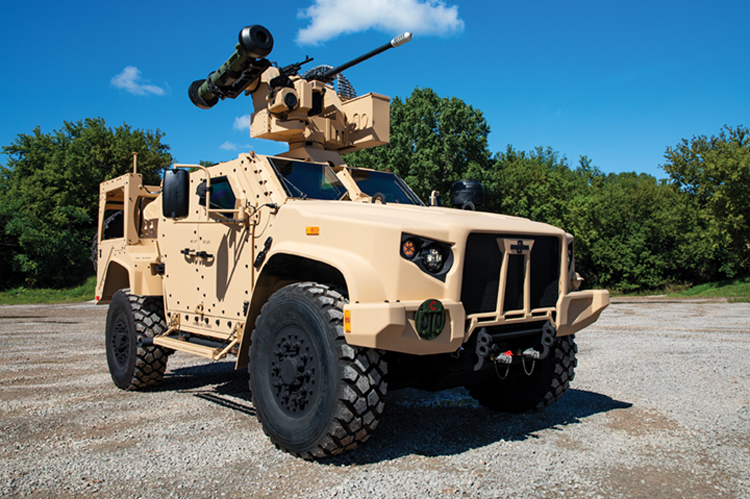 The Javelin and the JLTV ~ Oshkosh Defense has announced participation in successful flight tests at Redstone Test Center in Alabama.

Oshkosh, 24 June 2019: Oshkosh Defense, LLC, an Oshkosh Corporation company, along with several industry partners, participated in a successful Javelin flight test from a Kongsberg remote weapon station on a Joint Light Tactical Vehicle (JLTV) at the Redstone Test Center in Redstone Arsenal, Alabama. The contract, initially awarded at $13.3M, has a maximum value of $109.8M and calls for 170 semitrailers to be delivered between FY20 and FY21.

This successful demonstration further solidifies the importance of the JLTV’s position within the current combat fleet formation,” said George Mansfield, Vice President and General Manager of Joint Programs at Oshkosh Defense. “The JLTV is the only light tactical vehicle on the field today that can manoeuvre within combat formations, hauling critical weaponry and equipment quickly across complex terrain, all while keeping our troops safe and protected.”

This demonstration represents the first-time firing of both the Javelin and the Northrup Grumman lightweight 30mm cannon through a remotely operated weapon station on the Oshkosh Defense JLTV. The Javelin is an anti-tank, guided munition and surveillance weapon system made by the Javelin Joint Venture, a partnership between Raytheon Company and Lockheed Martin.

Distinguished US military guests, as well as guests from multiple allied nations, were able to attend and observe this special event.

Featured, Javelin, JLTV, KONGSBERG, Oshkosh
You may also like