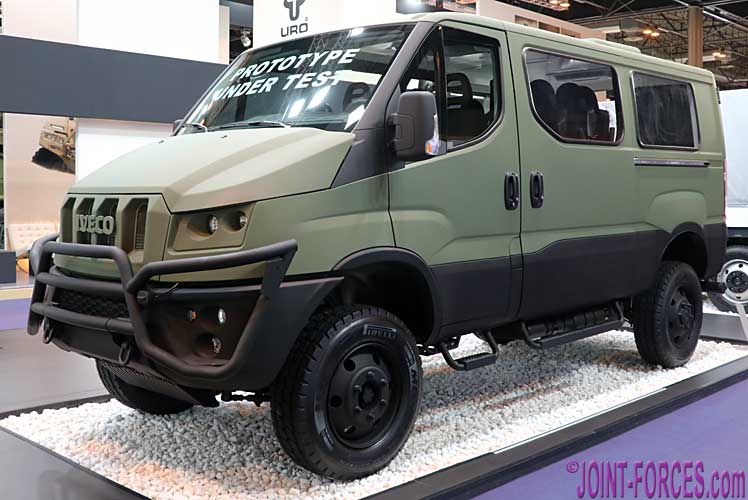 The Iveco Military Utility Vehicle, or MUV 4×4, was first displayed at the EUROSATORY 16 defence expo in Paris with the designation M70.20WM 4×4, writes Bob Morrison.

Billed as the replacement for the ageing M40:10WM family, which was derived from an earlier model of the Iveco Daily civilian van and pick-up family, the MUV 4×4 is available in five different wheelbase versions and in two-door Chassis Cab, four-door Crew Cab and six-door Van or Minibus versions.

As EUROSATORY 16 clashed with the ANAKONDA 16 exercise series in Poland I did not manage to get to Paris to cover the biennial expo, where a new Iveco military softskin Crew Cab with pick-up body was displayed, so it was not until the June 2018 show that I managed to look over the M70.20WM 4×4, which was now being promoted by the manufacturer as the MUV 4×4. The example displayed at EUROSATORY 18, on the left side of the large indoor Iveco stand, was in the longer Minibus configuration. Unfortunately my attention was first caught by the latest Iveco LMV 2 (Light Multi-role Vehicle Mk.2) demonstrator with Remote-controlled Weapon Station, the centrepiece of the display, and then by the up-armoured LMV 2 variant and so I completely forgot to snap the MUV; in my defence, I had to attend a product launch brief elsewhere at the Villepinte expo centre and ran out of time, but I really should have remembered to go back to the Iveco stand.

My next encounter with the MUV 4×4 was at EDEX 18 in Cairo last December, but this time the company chose to display the Crew Cab with pick-up rear body again, as this was deemed the most likely version to catch the attention of potential MENA (Middle East & North Africa) customers. The Iveco stand space at the inaugural EDEX was only slightly larger than the vehicle itself, so I could only photograph it from one side, but at least I now had shots for my library. Roll forward to FEINDEF 19 in Madrid, and the Minibus version of MUV 4×4 was back on view and this time I had both space and sufficient time to do a full photo walk-round.

Concentrating first on the MUV 4×4 Minibus, which is actually just a windowed version of the MUV 4×4 Van which can be configured as a personnel carrier with the option of removing some or all rear seats to give a light cargo vehicle, this is available in either 3595mm or 4175mm wheelbase versions and with either left hand or right hand drive and with single or twin rear wheels. Overall height is 2795mm and overall length varies from 5590mm for the shorter wheelbase to 7155mm for the longest version, plus there is also an intermediate length (5990mm) body option on the shorter wheelbase. Approach Angle for all versions is 40° but the varying rear overhangs mean Departure Angle reduces from a healthy 34° for the 3595mm wheelbase standard body version down to just 16° for the 4175mm wheelbase version, so although all vehicles have four wheel drive the longer versions would need to be driven with extreme care off-road to avoid grounding at the bottom of slopes or when negotiating wash-out sections of rough tracks etc. Unprepared fording depth is given as a respectable 650mm.

The Chassis Cab and Crew Cab versions are available, according to data sheets, on four wheelbases – 3080mm, 3480mm, 3780mm or 4175mm – with overall length varying from 4971mm to 6846mm and are slightly lower at 2458mm. As with the larger Van variants, they are powered by a Euro III or Euro IV engine, developing 146 to 175hp dependent on model, which should give a top road speed of 110km/hr. Either a manual 6-speed or automatic 8-speed transmission can be supplied. GVW, dependent on chassis type, is in the 5000kg to 7000kg range with a maximum payload of 3600kg for the larger versions. Towing capacity (braked) is up to 3500kg.

Specialist coachbuilders, such as Austria’s Franz Achleitner Gmbh, have already produced militarised versions of the MUV 4×4 and it is believed the new open-topped ANACONDA Light Tactical Vehicle which has just entered RNlMC service in the Dutch Caribbean is derived from this.