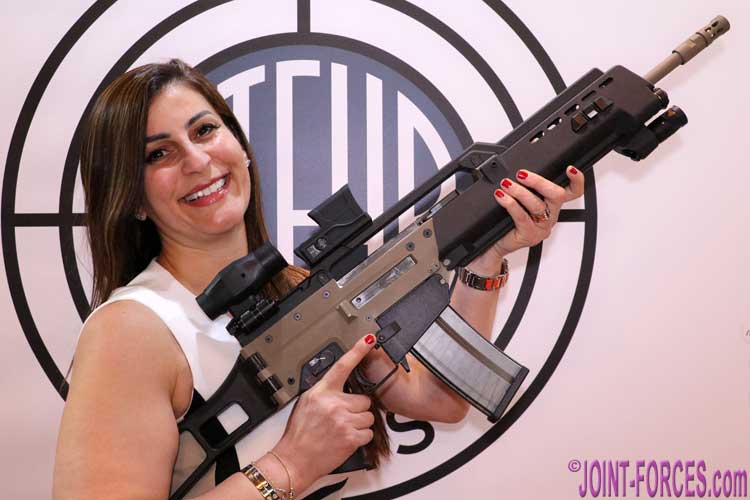 Under the FUERZA 35 programme the Spanish Army plans to upgrade its G36E assault rifles and the STEYR Mod G36 Upgrade may be one solution, reports Bob Morrison.

Between 1999 and 2005 the Spanish Ministry of Defence procured an initial batch of 75,219 Heckler & Koch G36E assault rifles, designated Fusil Asalto 5.56mm, of which 60,000 units were destined for the Spanish Army. With the oldest of these now approaching twenty years old a mid-life upgrade is due and STEYR ARMS Gmbh. of Austria believe they have an ideal solution, which they recently exhibited at FEINDEF 2019 in Madrid.

Teaming up with Wilcox Industries Corp. of New Hampshire, STEYR ARMS are offering a Mod G36 Upgrade programme consisting of enhanced components including: a new barrel; new receiver; new magazine well; and a WILCOX FUSION System. This package is intended to reduce the overall life-cycle cost of buying a completely new weapon platform. The new rifle and electro-optics technology combination is intended to bring the customer MoD (not just the Spanish MoD, as other nations are looking to upgrade their G36 arsenals) further into the 21st Century by increasing force lethality and giving the soldier the ability to more speedily engage targets.

Features and benefits of the upgrade include a cold hammer forged steel barrel, 100% compatible to the original barrel, increased thermal stability and a new lightweight alloy receiver to replace the old polymer receiver, thereby increasing strength and stiffness. The new STANAG magazine well will offer greater compatibility between magazine types, allowing more flexibility for procurement as well as for sourcing spares in-theatre from NATO allies on multinational ops. All upgrades are intended to maintain the same form and function as the original design and do not impede the operation of the weapon.

The proposed WILCOX FUSION System for the Steyr G36 Upgrade programme is a lightweight integrated modular forend, powered by a single CR123 battery, forming one holistic solution incorporating a Reflex Sight, Red Visible Laser, IR Laser, Fixed IR Illuminator and a SureFire dual spectrum head giving both white and infrared light. The system is designed to integrate into commonly used weapon accessories and the all-in-one modular system can be adjusted on the fly and controlled ambidextrously by the shooter. There is one single precision adjuster for each plane (windage and elevation) and a Trajectory Switch adjusts POA/POI for two pre-set firing solutions. A dual battery management system features primary and reserve supply. A x3 magnifier kit is available as an option.