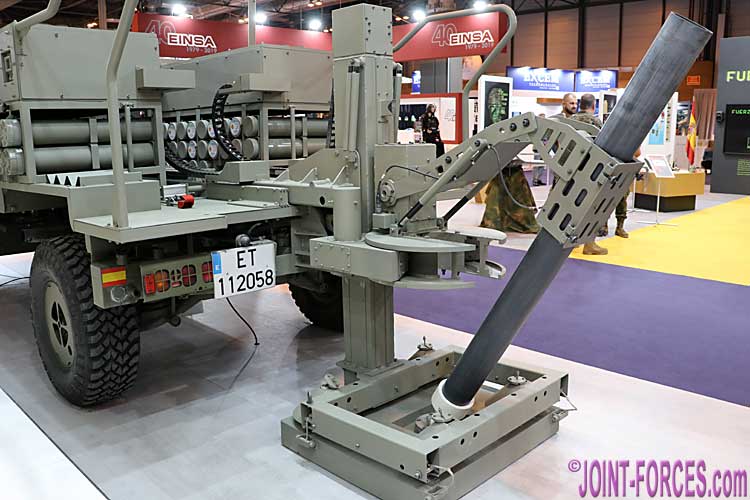 The ALAKRAN Light Mortar Carrier, designed and marketed by Spanish companies NTGS and everis Aerospace & Defense was one of the stars at FEINDEF 19, reports Bob Morrison.

The Spanish Army has commenced a fifteen year equipment modernisation programme, FUERZA 35, and Spain’s defence manufacturers have risen to the challenge. Between now and 2035 it is planned that all armoured vehicles, artillery systems and helicopters will either be significantly upgraded or replaced entirely to, in the words of Chief of Staff General Francisco Javier Varela Salas, ensure the Ejército de Tierra “will be a resolutive tool for the achievement of spaces of freedom and security in defence of the interests of Spain where and when needed”.

On display at FEINDEF 19, though first publicly unveiled in the Middle East in 2017 and now reportedly [JDW, 10 January 2019] in service in quantity with the Border Guards of an Arab Nation, the ALAKRAN system allows mortars up to 120mm calibre to be transported on, and fired by, light utility vehicles without either loss of accuracy or the need to expensively reinforce the carrier to absorb recoil during fire missions. Rather than firing the weapon from the loadbed, which requires the suspension to be locked and/or outriggers to be deployed, the ALAKRAN transports the weapon horizontally on the utility vehicle’s loadbed from where a low maintenance electro-pneumatic system speedily raises it to the vertical plane and lowers the baseplate onto the ground behind the carrier to give a solid firing position.

An Integrated Fire Control system, which can be operated either from inside the cab or by a mortar team member standing alongside the vehicle, allows accurate electro-mechanical aiming; stated accuracy is under 2mils, which is greater than if firing from the back of a vehicle. On the fire control side, the ALAKRAN’s software incorporates GIS (Geographic Information System) technology plus Zonal Shooting and Multiple Rounds / Simultaneous Impact functions to simplify missions and increase effect on the target. With a trained crew the mortar can be deployed and fired in under half a minute and, more importantly, it can start to reposition within seconds of firing the last round in a salvo as once the baseplate is raised clear of the ground the vehicle can start moving while the mortar stows itself. Firing range for the 120mm variant is in excess of 8,000 metres and rate of fire is 12 rounds in the first minute, with four rounds per minute thereafter.

The ALAKRAN (the name is believed to derive from Andalusian Arabic for SCORPION) was exhibited at FEINDEF mounted on a two-door VAMTAC ST5; the standard High Mobility Tactical Vehicle of the Spanish Army. In addition to the 120mm mortar, this version is capable of transporting up to 52 ready rounds of 120mm ammunition on racks down either side. The Fire Control System and additional equipment are stowed in lockers above the ammunition. It is also possible to fit ALAKRAN to smaller light utility vehicles, such as the Santana Anibal used by the Spanish Army, but in this case an 81mm mortar would be more likely.

The accompanying video shows the mortar being retracted in a unique demonstration organised for JOINT-FORCES.com by Señor Bitar, Vice President Defence Systems at everis. Note that the video was deliberately cropped to avoid revealing a commercially sensitive part of the baseplate operating mechanism.