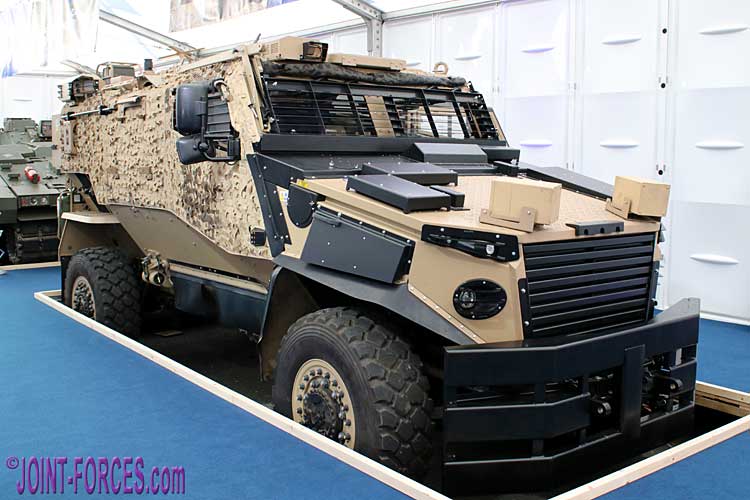 In addition to the image of the Challenger 2 LEP (Life Extension Programme) prototype which caught our eye earlier – see here – there was also a *FOXHOUND Public Order Vehicle on display in the Vehicle Zone, along with one of the new British Army ARES fleet and a 3rd Generation BRONCO Evolution which ST Engineering is proposing for the UK MoD FATV (Future All-Terrain Vehicle) programme.

We will produce a wider report of what we have covered over both main conference days, as well as the prequel Support Day and the follow-on Robotics & Autonomous Systems Focus Day on Thursday, in due course but in the meantime hopefully these exclusive photos of FOXHOUND POV, which industry rumours suggest may be a lot more than just a concept vehicle, and BRONCO Evolution (snapped during pre-show build-up) will whet your appetite.

*Updated: 23rd January 2019: This afternoon GDLS – FPE (General Dynamics Land Systems – Force Protection Europe) confirmed to JOINT-FORCES.com that the POV concept vehicle at IAV19 is actually a modification to a UK MoD specification FOXHOUND and not, as previously indicated, an OCELOT. If this modification were to be procured for FOXHOUND, the Barracuda MCS (Mobile Camouflage System) would naturally be removed from any core fleet vehicles being deployed by UK Forces in the Public Order role in the same way that FOXHOUNDS deployed to Norway on TRJE18 minus their camo.