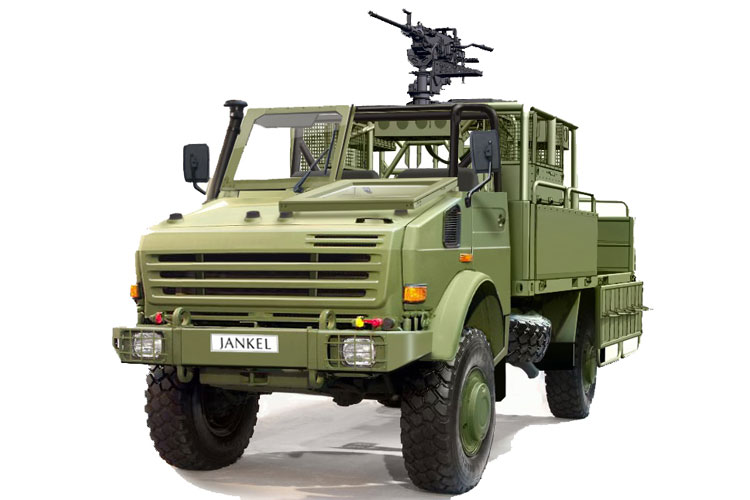 Press Release: Jankel, a world-leader in the design and manufacture of high-specification defence, security and NGO protection systems, has today announced their achievement of Direct Partnership certification from Mercedes-Benz. This announcement coincides with the Defence Vehicle Dynamics (DVD) event taking place on 19/20 September 2018 at Millbrook, where Jankel will be exhibiting their capabilities on stand number OR-12.

The certified Direct Partnership approval comes at the end of an extensive and exhaustive Due Diligence process, where Mercedes-Benz has fully assessed Jankel’s capability to market, sell and support modified Mercedes Benz commercial-off-the-shelf (COTS) chassis systems; a significant achievement for Jankel. This partnership arrangement gives Jankel access to otherwise unavailable levels of technical information and support from Mercedes-Benz, as a COTS chassis system OEM, significantly strengthening the offering to the end-user.

Jankel has successfully developed their business model in recent years to become a company that delivers fully engineered tactical and military vehicles, with the benefits of matching a range of highly capable COTS chassis systems, such as those produced by Mercedes-Benz, amongst others.

The recently announced contract award for the Light Troop Transport Vehicle (LTTV) programme in Belgium will see Jankel deliver 199 modified Mercedes UNIMOG vehicles to the Belgium Ministry of Defence (BeMOD). The LTTV contract follows on from Jankel’s contract win in 2015 to supply the BeMOD with over 100 FOX Rapid Reaction Vehicles (RRV); Jankel’s FOX being based on a modified COTS Toyota chassis system.

At DVD, as well as the Mercedes-Benz UNIMOG LTTV, Jankel will be presenting a range of Toyota-based options including a Civilian Armoured Vehicle (CAV) LC200; a Fox RRV-x; and a 6×6 70 series extended chassis Land Cruiser. With the Armoured LC200 CAV, Jankel will be show-casing specialist upgrades delivering higher protection levels, including innovative security and safety technologies.

Dan Crosby, Commercial Director at Jankel said: “Achieving Mercedes-Benz Direct Partnership certification is a huge step for the whole team at Jankel and one we’re exceedingly proud of. As well as enabling us to offer a range of OEM-approved armoured, tactical and utility vehicles based on modified Mercedes-Benz COTS chassis systems, this certification validates our ability to effectively modify other COTS vehicle types to the same exacting standards.” He added: “We’ve achieved a number of significant milestone successes in recent years and we’re looking forward to building on these, whilst continuing to deliver exactly what our customers need”.