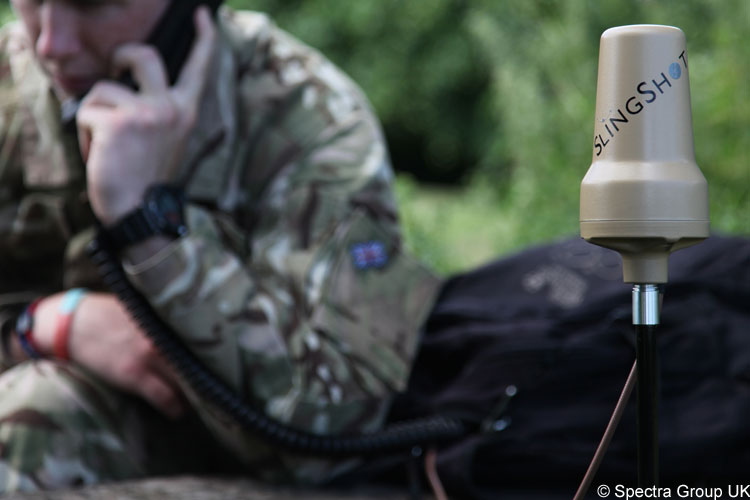 Spectra Group (UK) Ltd will be at Defence Vehicle Dynamics next week to showcase their revolutionary SlingShot communications system.

Press Release: Working in collaboration with Jankel, SlingShot will be on display in a number of configurations mounted in Jankel specialist military and civilian vehicles on stand number OR-12 at DVD, being held at Millbrook Proving Ground on 19/20th September.

SlingShot is a unique system that enables UHF and VHF radios to work on L-Band Satellite frequency, allowing users to instantly extend the range of their communications equipment to BLOS (Beyond Line of Sight). Conceived and designed to meet demanding Special Forces requirements, SlingShot also offers a significant number of benefits for conventional and land forces requiring secure, reliable and robust Communications On The Move (COTM). Over 3000 SlingShot systems are in operation world-wide, used by 18 different organisations, including several NATO countries, as Manpack, Vehicle, Maritime and Aviation fits.

SlingShot will be displayed on various Jankel vehicles including the FOX RRV, seen here at EUROSATORY [© Bob Morrison]

At DVD, the military UHF variant of Spectra’s SlingShot will be exhibited on the Jankel FOX RRV-x, with a standard magmount antenna. The civilian, commercial VHF variant with discrete, low-profile antennas, will be mounted on Jankel’s Toyota-based Civilian Armoured Vehicle (CAV) Land Cruiser 200.

Simon Davies, CEO of Spectra Group said: “Spectra is delighted to be exhibiting SlingShot in collaboration with Jankel. This will allow us to highlight both the military and low-profile variants that will be of interest to any organisations or units that require BLOS COTM capability without drawing attention to their vehicles.”