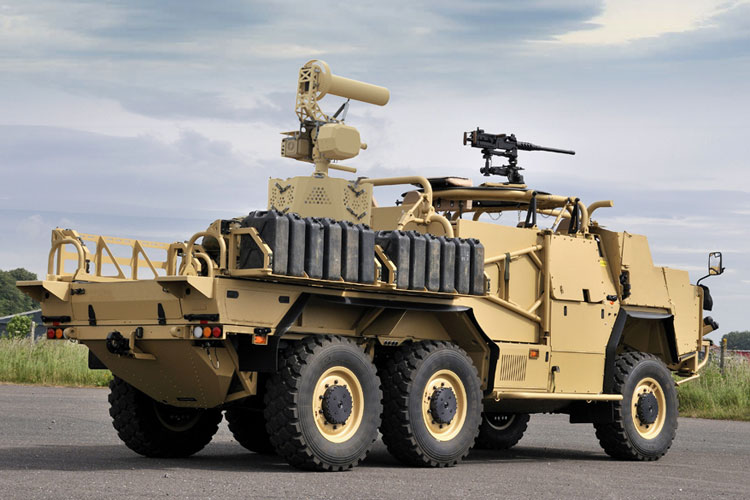 Supacat is unveiling its HMT 600 COYOTE in the mobile Anti-UAV role mounted with the operationally proven AUDS Anti-UAV Defence System at DVD.

Press Release, 12th September: UK Special Operations Vehicle developer, Supacat, is displaying its HMT 600 tactical support vehicle, best known as COYOTE, in an anti-UAV defence role for the first time at DVD 18 [at Millbrook Proving Ground next week]. It will be installed with AUDS (Anti-UAV Defence System), the only operationally proven counter-drone system, supplied by Chess Dynamics and the AUDS Team.

In November an AUDS mounted COYOTE will participate in AUTONOMOUS WARRIOR, the 2018 Army Warfighting Experiment, which will test how Robotic and Autonomous Systems (RAS) can be exploited in the Land Environment and assess their ability to reduce the danger to troops during combat.

“This is a further example of the flexibility of the HMT platform, which can be reconfigured to integrate the latest technology and enhance capability for our armed forces on the modern battlefield,” said Phil Applegarth, Head of Supacat.

The COYOTE-mounted AUDS is the latest collaboration in a long standing relationship between Supacat and fellow UK SME, Chess Dynamics, and demonstrates the agility of both UK companies in coming together to deliver battle ready solutions that fill a capability gap.

“We are both innovative, high technology British SMEs of similar size and geared to responding at speed to customer requirements. We both build world beating products in Britain that are successful abroad, making exports a central focus for our businesses”, said Applegarth.

AUDS is in service with the US forces in both its field mast configuration and has also been installed on STRYKER vehicles. It has over 700 confirmed ‘kills’ and has been on continuous combat operations since it deployed almost two years ago. It is designed to disrupt and neutralise unmanned aerial vehicles (UAVs), remotely piloted aircraft systems (RPAS) or unmanned aircraft systems (UAS) engaged in hostile airborne surveillance and potentially lethal activity.