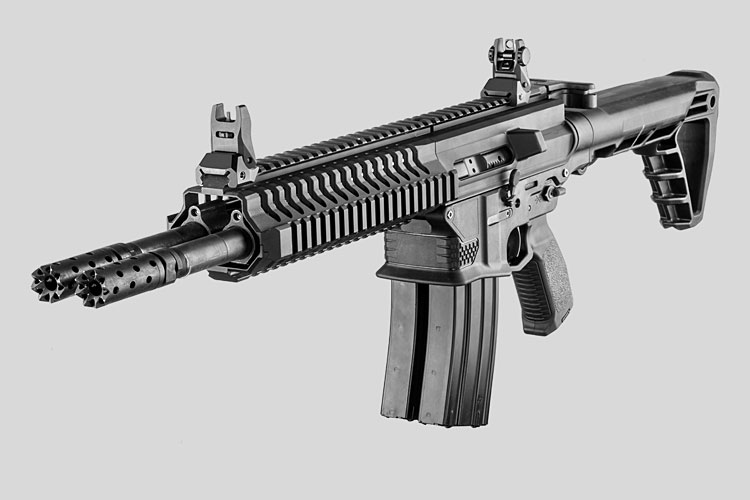 SNAKE, the newest member of the successful GILBOA family of rifles, delivers both a double-barrelled impact as well as significantly reduced weight.

Press Release: Silver Shadow – a licensed firearms manufacturer, trader and authorised supplier to the Israel Ministry of Defense and Israel Police – debuts its next-gen Gilboa DBR-SNAKE 5.56x45mm rifle at Eurosatory 2018. It is the newest member of the successful Gilboa family of rifles, and the only double-barrelled AR rifle in the world, operated by gas. In addition to its powerful impact, the total weight of the weapon has been significantly reduced.

According to Micky Shoham, VP Marketing and Sales, “We are pleased to unveil the Gilboa DBR-SNAKE 5.56x45mm gas-operated rifle. We have developed a double-barrelled weapon delivering double impact, with a weight close to a standard rifle. The lighter weight is due to the lack of a piston, as well as the fact that the weapon’s lower receiver and the integrated buttstock are made of composite materials instead of aluminium.”

The double-barrelled SNAKE allows faster traversing between multiple targets by enabling two rounds on the target with each shot, side-by-side trigger pull, thereby minimising time per target. It has wider upper and lower receivers to incorporate the two independent firing systems. The two parallel barrels are 3 cm apart from the bore centre.

The 5.56×45 mm calibre weapon weighs 4.5kg without the magazine. Its overall length is 790mm, with a barrel length of 2x292mm (11.5″), and a weapon width of 92mm. The firing mode is double semi-automatic, with the method of operation direct impingement gas systems.

Among its many benefits are the redundancy of having two mechanisms working at all times – giving a soldier double fire power, higher penetration due to tight grouping, and higher accuracy during penetration through hardened glass with the first round weakening the barrier.

The flat top platform with standard size Picatinny rails enables the mounting of various optics, lasers, and other tactical accessories. The Gilboa firearms are compatible with US and NATO standard for mounts and equipment and are built to MIL-STD and MIL-SPEC.