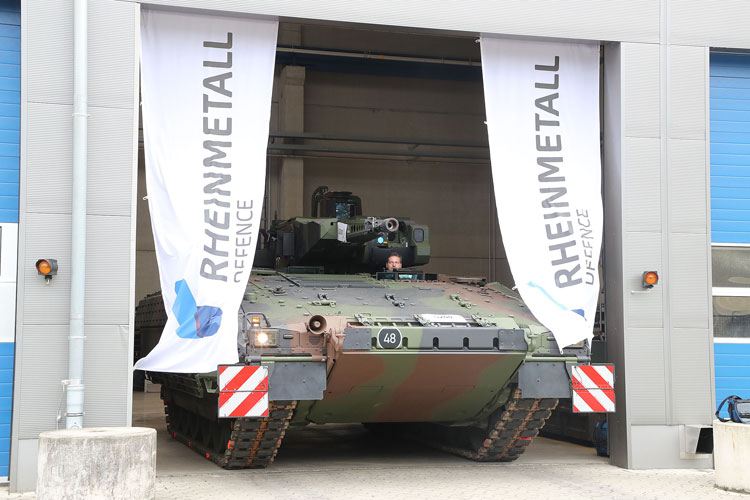 The 200th PUMA infantry fighting vehicle earmarked for the Bundeswehr has just rolled off the assembly line at the Rheinmetall plant in Unterlüß in Lower Saxony.

Press Release: The 200th vehicle is also the 100th PUMA manufactured by the Düsseldorf-based tech enterprise, part-owner of the joint venture tasked with producing the vehicle. The jubilee vehicle will soon be arriving at the Bundeswehr’s force integration organization in Munster a.d. Örtze, likewise located in Lower Saxony.

The PUMA IFV is the raison d’être of Projekt System & Management (PSM) GmbH, the fifty-fifty joint venture of Rheinmetall and Krauss-Maffei Wegmann in charge of developing and producing the vehicle as well as providing subsequent in-service support. (Each of the two partners is responsible for manufacturing half of the vehicles on order.) Just attained, this milestone shows that production of the PUMA is in full swing and proceeding according to plan.

The state-of-the-art Infantry Fighting Vehicle is currently be[ing] integrated into the force structure of the German Army. Delivery of all 342 combat vehicles, which commenced in 2015, is scheduled for completion in 2020. In addition to the IFVs, the Bundeswehr has also taken delivery of eight driver training vehicles.

With the introduction of the PUMA IFV by the Bundeswehr, the German mechanised infantry corps now has a new mainstay, one that represents a major departure in armoured vehicle design. The most advanced system in its class, the versatile PUMA is perfect for operational scenarios in every climate zone. It sets new standards with regard to battlefield lethality, mobility, command and control, and situational awareness. Besides an array of modular, highly effective force protection features, the Puma boasts massive fire power and excellent network-enabled operations capabilities. This new Infantry Fighting Vehicle is roomy enough to carry nine soldiers, yet compact enough to be airlifted into the theatre of operations in an A400M military transport plane

Nor is Rheinmetall’s role restricted to manufacturing half of all PUMA IFVs: via PSM GmbH, the Bundeswehr has now contracted with the Group to expand the system’s capabilities. These should keep the vehicle on the cutting edge for decades to come, while simultaneously improving possibilities for training. Among other things, this includes development of the new ‘turret-independent secondary weapon system’, or TSWA, for the PUMA, which will enable the use of non-lethal munitions, as well as installation of advanced visualization technology and displays.

A further order encompasses new resources for training PUMA turret operators. Separate turret training systems, each consisting of a standard turret and the upper section of the PUMA hull, will in future enable the commander and gunner to sharpen their skills without having to use the original equipment. And maintenance personnel can practise repairing and servicing turrets in an effective, highly realistic way. This saves resources and leads to lower costs by reducing wear and tear on the actual vehicles, which moreover are never tied up due to routine training commitments. This make it possible to structure training operations much more flexibly.

Other orders include the manufacture and supply of airburst-capable 30mm x 173 cal. ammunition as well as a firing apparatus, special tools and spare parts.

NATO and NATO-associated nations are currently showing a keen interest in the PUMA. The vehicle has demonstrated its outstanding capabilities in multiple comparative trials.