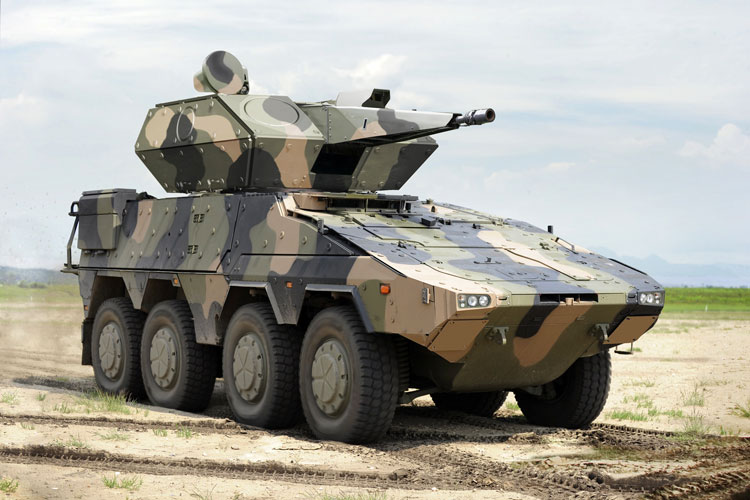 Move – Sense – Strike: under this motto, Rheinmetall will be showcasing its comprehensive array of products at EUROSATORY from 11 to 15 June 2018.

Once again, numerous new products will be making their debut at Europe’s largest defence show at the Rheinmetall pavilion, underscoring our status as one of the world’s leading makers of military systems and equipment:
•  Oerlikon Skyranger Boxer mobile air defence system: A highly effective wheeled armoured air defence system based on the battle-tested 8×8 Boxer, it is equipped with a 35mm revolver cannon as well as its own suite of search and target-tracking sensors.

•  HX77 Automated Load Handling System (ALHS): Rheinmetall will launch the innovative and versatile automated load handling system developed with the Australian company Supashock on Monday, 11th June.. The ALHS is integrated into the high-mobility HX77 truck with a protected cabin.

•  Lynx KF41: The versatile new combat vehicle. The prototype of this medium-weight tracked vehicle will be debuting twice at EUROSATORY. First configured as an infantry fighting vehicle with the new LANCE 2.0 turret on Tuesday 12th June. On Wednesday, 13th the same vehicle will be configured as command variant. Refitting will take place on-site.

•  Detect. Connect. React. Solutions for the digital battlefield: with the debut of Argus New Generation, Rheinmetall continues to expand its lead in the soldier systems domain. Also on show at Eurosatory are Germany’s Future Soldier – Expanded System and the systematically enhanced Gladius 2.0. The Group’s TacNet tactical management system will also be presented, paired with cutting-edge mission equipment for combat vehicles.

In addition to this, Rheinmetall will be highlighting its comprehensive expertise in practically all military capability categories. Among other things, these include weapon and ammunition systems for threat-commensurate, scalable engagement of targets; advanced force protection solutions ranging from camouflage devices to high-performance armour and active hard-kill protection systems; and innovative, network-capable sensors for land, sea and air applications. Rheinmetall is also one of the world’s foremost suppliers of simulation and training systems, thus contributing to the operational readiness and effectiveness of modern armed forces and security services.