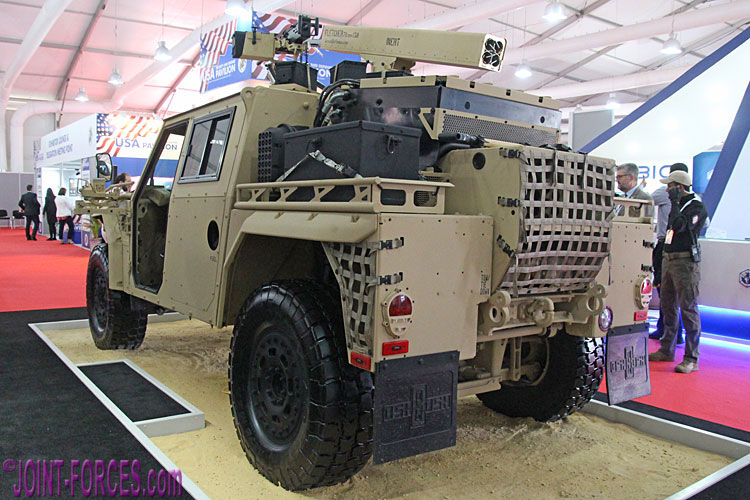 The Oshkosh S-ATV ( Special Purposes All-Terrain Vehicle) made a surprise appearance at this year’s SOFEX in Amman, where it was displayed with both a 12.7mm heavy machine gun on lightweight ring mount and an Arnold Defense FLETCHER multiple rocket launcher.

Last week, to coincide with the expo’s opening day at Marka in Jordan, the manufacturer issued the following press release but a couple of days beforehand we were able to have a sneak preview during the show build-up phase.

Press Release, 8th May 18: Oshkosh Defense, LLC, an Oshkosh Corporation company, showcased its Special Purposes All-Terrain Vehicle (S-ATV) at the Special Operations Forces Exhibition & Conference (SOFEX), taking place May 8-10 in Amman, Jordan. The S-ATV is lightweight and agile, with a modular design to meet a diverse range of mission requirements for armed forces in the United States, Middle East, and around the world.

“Building on the success of Oshkosh’s proven off-road military vehicles, the Oshkosh S-ATV is a military-grade platform that is rugged, versatile, and built for speed,” said Mike Ivy, Vice President and General Manager of International Programs, Oshkosh Defense. “With its superior levels of off-road mobility and manoeuvrability, as well as its ability to disembark aircraft with primary weapons ready to fire in 60 seconds or less, the S-ATV enables Special Forces units to deploy quickly with stealth and agility in the most severe environments.”

The S-ATV comes equipped with the Oshkosh TAK-4i intelligent independent suspension system, providing soldiers with superior manoeuvrability and a smooth ride. The Oshkosh S-ATV can operate in the harshest terrain with a 70 percent off-road profile capability and cruising range of 800 km at 110 kilometres per hour, with a top speed of 145 kph.

The S-ATV is available in multiple configurations with varying protection levels, making the platform easily transportable via both fixed and rotary-wing platforms; it can be carried internally in a CH-47 or externally under either a CH-47 or CH-53. <ends>

First unveiled at a US Marines exhibition in Quantico in 2012, the S-ATV was conceived to “provide the advanced performance needed for Special Reconnaissance, Counter-Insurgency Operations, Long Range Surveillance, Site Seizure and Direct Combat”. According to the manufacturer, the modular design of the S-ATV allows forces to rapidly reconfigure seating, upgrade protection options, and utilise plug & play C4I capabilities to adapt to the mission.

With a kerb weight of 3740kg and payload capacity of 1930kg, this five-man vehicle (including driver in centre, commander and top gunner) has a top speed of 145km/hr or 90mph and is transportable inside or underneath CH-47 or CH-53 medium lift helicopters. In addition to the ring mount for a heavy machine gun, the vehicle can also be fitted with three door-mounted of 5.56mm or 7.62mm calibre close support machine guns or a grenade machine guns.