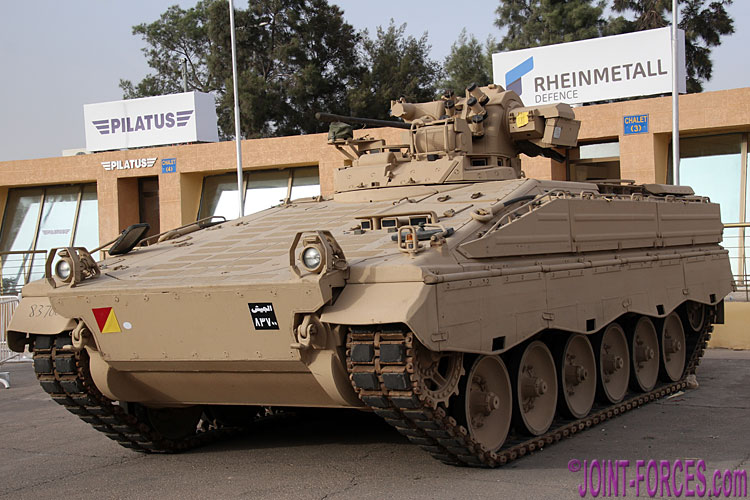 In December 2017 armoured vehicle manufacturers Rheinmetall announced that the German government had contracted with them to upgrade a further 25 Marder infantry fighting vehicles from surplus Bundeswehr stocks.

In 2016/2017 Rheinmetall supplied the Hashemite Kingdom with 25 Marder 1A3 infantry fighting vehicles which were modernised and supplied to the JAF (Jordanian Armed Forces) under a German military assistance programme aimed at “bolstering the capabilities of the Jordanian Armed Forces in the fight against international terrorism as well as for border security and stabilisation missions”.

Delivery of the second tranche of 25 Marders, worth over €17 million, began in the first quarter of 2018 and JOINT-FORCES understands all were in-theatre by the time of our visit to SOFEX* in early May; the vehicle in the photographs is understood to have already been deployed for border security duties.

As part of this modernisation the Marder IFVs were equipped with the very latest Rheinmetall thermal imager, rather than the previous WBG-X model, giving an enhanced infrared system to ensure sustainability; this upgrade can be retrofitted to Marder at base workshop level, on a plug-and-play basis.

*Footnote: SOFEX, the Special Operations Forces Expo, is a leading and somewhat unique Middle East defence equipment and capability exhibition which draws in specialist military exhibitors from around the globe, as well many possibly not so well known national and regional suppliers, and allows them to display defence and homeland security wares to military specifiers and buyers from far and wide.