Italy and Japan To Join UK On GCAP Fighter 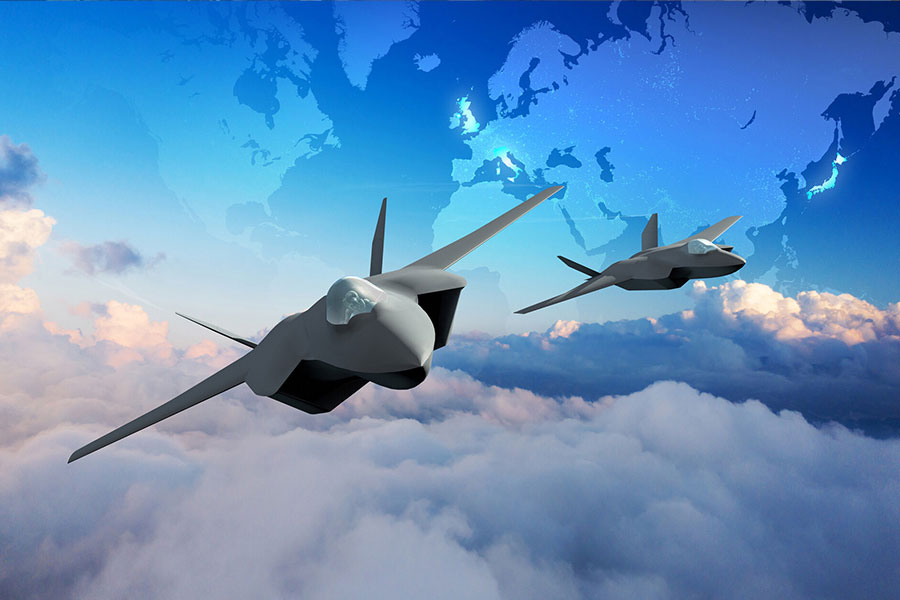 New international GCAP coalition to develop the next generation of combat aircraft ~ UK, Italy and Japan will join forces on future fighter jets.

Press Release, Whitehall, 09 December 2022: The UK will work with Italy and Japan to adapt and respond to the security threats of the future, through an unprecedented international aerospace coalition announced by the Prime Minister today (Friday).The Global Combat Air Programme (GCAP) is a new partnership and ambitious endeavour between the UK, Japan and Italy to deliver the next generation of combat air fighter jets.

The Prime Minister will visit a UK RAF base today to launch the first major phase of the programme, which aims to harness the combined expertise and strength of our countries’ defence technology industries to push the boundaries of what has been achieved in aerospace engineering to date. Due to take to the skies by 2035, the ambition is for this to be a next-generation jet enhanced by a network of capabilities such as uncrewed aircraft, advanced sensors, cutting-edge weapons and innovative data systems.

By combining forces with Italy and Japan on the next phase of the programme, the UK will utilise their expertise, share costs and ensure the RAF remains interoperable with our closest partners. The project is expected to create high-skilled jobs in all three countries, strengthening our industrial base and driving innovation with benefits beyond pure military use.

The Prime Minister said: “The security of the United Kingdom, both today and for future generations, will always be of paramount importance to this Government.

“That’s why we need to stay at the cutting-edge of advancements in defence technology – outpacing and out-manoeuvring those who seek to do us harm.”

“The international partnership we have announced today with Italy and Japan aims to do just that, underlining that the security of the Euro-Atlantic and Indo-Pacific regions are indivisible. The next-generation of combat aircraft we design will protect us and our allies around the world by harnessing the strength of our world-beating defence industry – creating jobs while saving lives.”

It is anticipated that more like-minded countries may buy into GCAP in due course or collaborate on wider capabilities – boosting UK exports. The combat aircraft developed through GCAP is also expected to be compatible with other NATO partners’ fighter jets.

During a visit to RAF Coningsby today, the Prime Minister will view the Typhoon aircraft which have been at the heart of the UK’s air policing for two decades. The new combat aircraft designed by GCAP is expected to replace the Typhoon when it comes out of service. The Prime Minister will also meet Quick Reaction Alert Station engineers and pilots, who protect the UK’s skies 24 hours a day, 7 days a week.

The UK, Italy and Japan will now work intensively to establish the core platform concept and set up the structures needed to deliver this massive defence project, ready to launch the development phase in 2024. Ahead of the development phase, partners will also agree the cost-sharing arrangements based on a joint assessment of costs and national budgets. Alongside the development of the core future combat aircraft with Italy and Japan, the UK will assess our needs on any additional capabilities, for example weapons and Uncrewed Air Vehicles.

A report by PricewaterhouseCoopers last year, suggested the UK taking a core role in a combat air system could support an average of 21,000 jobs a year and contribute an estimated £26.2bn to the economy by 2050.

Defence Secretary Ben Wallace said: “This international partnership with Italy and Japan to create and design the next-generation of Combat Aircraft, represents the best collaboration of cutting edge defence technology and expertise shared across our nations, providing highly skilled jobs across the sector and long-term security for Britain and our allies.”

GCAP sits alongside our other defence cooperation with international allies, including the AUKUS partnership and NATO – to which the UK remains the leading European contributor. The UK defence industry is already leading the world in advanced aerospace engineering. At BAE Systems’ new ‘factory of the future’ in Lancashire, for example, the company is pioneering the use of advanced 3D printing and autonomous robotics in military aircraft.

Joint Statement from Prime Ministers of UK, Italy and Japan

09 December 2022: As leaders of Italy, Japan and the UK, we are committed to upholding the rules-based, free and open international order, which is more important than ever at a time when these principles are contested, and threats and aggression are increasing. Since defending our democracy, economy and security, and protecting regional stability, are ever more important, we need strong defence and security partnerships, underpinned and reinforced by a credible deterrent capability.

Our three nations have longstanding, close relationships based on the shared values of freedom, democracy, human rights and the rule of law. Today, we are taking the next step in our deepening trilateral partnership. We are announcing the Global Combat Air Programme (GCAP) – an ambitious endeavour to develop a next-generation fighter aircraft by 2035.

Through the GCAP, we will build on our longstanding defence relationships. The GCAP will accelerate our advanced military capability and technological advantage. It will deepen our defence co-operation, science and technology collaboration, integrated supply chains, and further strengthen our defence industrial base.

This programme will deliver wider economic and industrial benefits, supporting jobs and livelihoods across Italy, Japan and the UK. It will attract investment in research and development into digital design and advanced manufacture processes. It will provide opportunities for our next generation of highly skilled engineers and technicians. By working together in a spirit of equal partnership, we are sharing the costs and the benefits of this investment in our people and technologies. Importantly, the programme will support the sovereign capability of all three countries to design, deliver and upgrade cutting-edge combat air capabilities, well into the future.

This programme has been designed with our Allies and partners at its very heart. Future interoperability with the United States, with NATO and with our partners across Europe, the Indo-Pacific and globally – is reflected in the name we have chosen for our programme. This concept will be at the centre of its development. We share ambition for this aircraft to be the centrepiece of a wider combat air system that will function across multiple domains.

Our hope is that the Global Combat Air Programme, and through it our capability partnership, will be a cornerstone of global security, stability and prosperity in the coming decades.