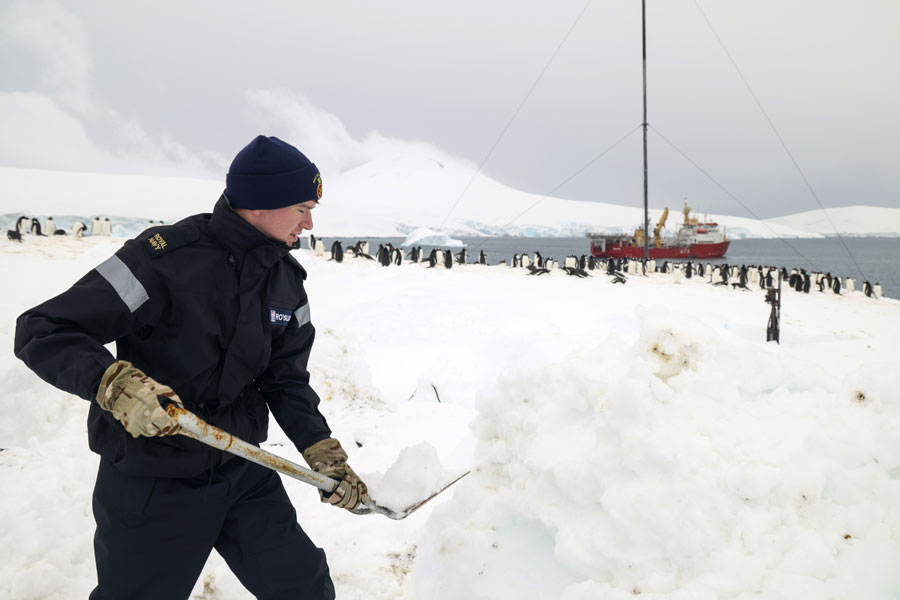 Sailors from Royal Navy ship HMS Protector shifted several tonnes of snow to dig out the staff of an isolated Antarctic scientific base.

News Release, Whale Island, 03 December 2022: [embargoed until 22:30] Sailors from Royal Navy ship HMS Protector shifted several tonnes of snow to dig out the staff of an isolated Antarctic scientific base.

Located on a small island near the tip of the Antarctic Peninsula, Port Lockroy is both an important historical site and a key base for scientific research. The site was hit by heavy spring snowfall – between two and four metres deep – which buried some of the buildings and damaged the roof of one key structure. A team of sailors and Royal Marines from HMS Protector spent two days clearing snow and also carrying out temporary repairs alongside the small UK Antarctic Heritage Trust team who look after Port Lockroy.

The weight of snow on Bransfield Hut – home to the base’s museum, gift shop, and post office – caused the roof to sag. Protector’s marine engineers used traditional naval damage control methods using wooden stakes and blocks to stabilise the structure, similar to how they would support a deckhead or bulkhead on a damaged warship.

“It is good for the ship’s company to step ashore and help out. The sailors were all smiles and happy to get cracking on with such a worthwhile task,” said Warrant Officer First Class Lee ‘Rattler’ Morgan, Protector’s Executive Warrant Officer, paying his second visit of the year to Port Lockroy. “I was taken aback by the sheer amount of snow and how the buildings had all but disappeared. When I left here at the beginning of the year, the penguins were lying on bare ground of rocks and mess – at least the snow got rid of the smell.”

Lee has served in the Royal Navy for 26 years, but this year has been his first experience of the frozen continent. “Some lucky younger officers and ratings have had this experience early on in their careers and no doubt it will stay with them. It is such a strikingly beautiful place and it is a total privilege to be here,” he added.

Engineering Technician Marine Engineer Jack Pearce is one such sailor – at the beginning of his Royal Navy career. “This is only my second ‘run ashore’ [port visit] in the Navy having come out of training just three weeks ago,” he said. “It’s amazing to be here, I have enjoyed the scenery and wildlife but also it feels great making a difference by working with the UK Antarctic Heritage Trust.”

Over 600 miles south of Cape Horn – the southernmost tip of the Americas – and more than 900 miles from Stanley, capital of the Falklands, Port Lockroy acted first as a whaling station, then as a research base and, for the past 15 or so years, as a museum and tourist attraction, visited by upwards of 20,000 people during the summer season, while the world’s most southerly post office handles around 80,000 cards mailed each year to more than 100 countries. A seven-strong team was setting up the base for the austral summer – Clare Ballantyne, Mairi Hilton, Natalie Corbett and Lucy Bruzzone who will run the site over the coming months, assisted initially by an electrician, the base manager and heritage conservation manager who are leaving shortly.

Port Lockroy was the first stopping point for HMS Protector. The ship has also delivered vital supplies to Uruguayan scientists at Artigas, following an agreement between London and Montevideo. The Uruguayan capital was the icebreaker’s last port of call before heading to Antarctic. With no port at Artigas, just a sheltered bay, Protector’s small Zodiac boat was used to deliver the kit on to a rocky beach, despite a strong, cold wind and breaking waves. From there crew worked with the scientists to shift the deliveries – including fire extinguishers, paint, electrical components, half a dozen bulk containers and a quad bike – into the base.

Captain Milly Ingham, Protector’s Commanding Officer, added: “This was our third base visit of the season but the first that was manned and fully open. We received an incredible warm welcome from Colonel Jose Fonseca and his team. We were delighted to be able to drop off engineering supplies and equipment to assist them in their work.’

The offer to deliver to Artigas was made during talks between Armed Forces Minister, The Rt Hon James Heappey MP, and his Uruguayan counterpart, when they recently met in Montevideo.

The deliveries were well received by Artigas’ commander, Colonel Jose Fonseca, who told Captain Ingham: “My team and I really enjoyed your visit, everything was successful and I appreciate your support.”