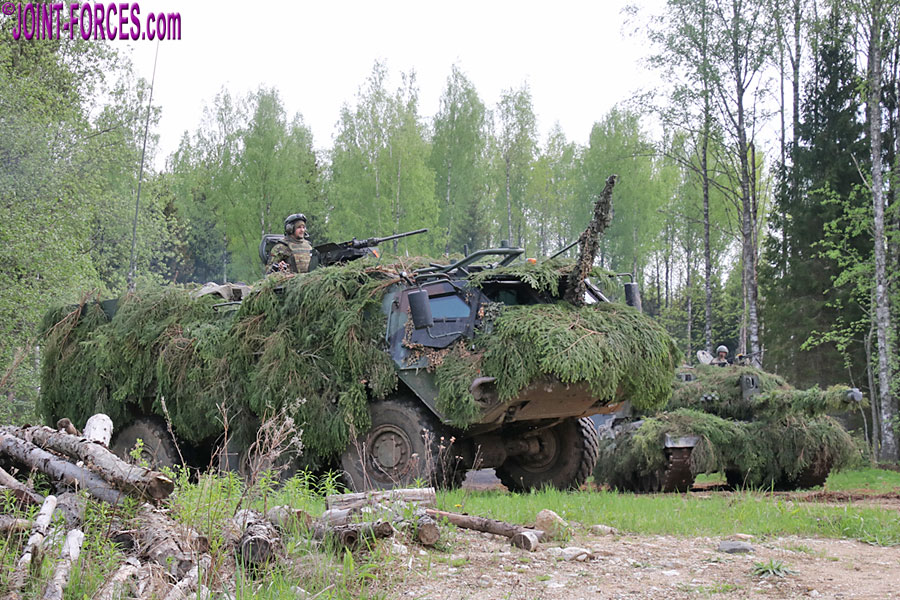 Joint Statement, Whitehall, 08 November 2022: The UK’s Secretary of State for Defence Ben Wallace and Estonia’s Minister of Defence Hanno Pevkur met in London on 8 November 2022 and committed to ever stronger ties between our two countries.

The excellent defence and security relationship that Estonia and the UK share is built on the solid foundations of shared interests and values and an exceptional history of close cooperation between our two armed forces. We cooperate frequently at all levels in all domains: through NATO maritime deployments at sea, Baltic Air Policing and air surveillance in the air, and through the UK’s commitment as the enhanced Forward Presence (eFP) framework nation on land. Our five-year eFP collaboration exemplifies what is possible when two similarly minded, close Allies come together in shared commitment and purpose.

In the face of a continuously challenging security situation in Europe, we have today signed a Defence Roadmap which sets out our joint plan to implement the commitments made at the NATO Madrid Summit for the forward defence of Estonia. Its implementation will lead to more capable UK presence, better able to deter aggression and to defend Estonia in crisis and conflict. It will contribute to our shared objective of protecting our populations and defending every inch of Allied territory at all times.

Estonia will start the development of an Estonian warfighting Division as agreed at the Madrid Summit. The Estonian Division will command in-place national and Allied forces as well as possible reinforcement units, to ensure seamless use of all national and Allied capabilities in the defence of Estonia. The establishment and staffing of the Divisional HQ will be completed in January 2023, with evaluation training in the Summer, leading to certification in 2024. The UK will also work closely with Estonia to support the development of its own national Divisional Headquarters, providing training and mentoring through a bespoke advisory team and the development of close links with the UK’s 3rd Division.

The UK will enhance the effectiveness of its permanently based eFP Battlegroup by maintaining Divisional-level assets (namely short range air defence and multiple launch rocket systems) in country and augmenting these with periodic deployments of additional capabilities and enablers, including Apache and Chinook helicopters. Deployment of these capabilities will also present opportunities to exercise these assets under the command of the Estonian Division HQ. The first of these periodic surges will begin in January 2023, when Chinook Helicopters will deploy to Estonia. The UK will also enhance the capability of their eFP Headquarters, which from April 2023 will be led by a Brigadier. In light of this additional support, the UK’s temporary second Battlegroup, which deployed to Estonia in February 2022, will return to the UK in December 2022.

The UK will also hold the balance of a Brigade at high readiness in the UK, ready to reinforce Estonia and the Baltics at a time of need. To ensure this Brigade is fully interoperable and integrated with Estonia’s National Defence plan, the UK will regularly exercise the reinforcement of UK forces in Estonia up to Brigade-level. The first such exercise is planned for May 2023, when the UK will deploy additional forces to Exercise SPRING STORM, including a Brigade HQ alongside a Battlegroup. Estonia will provide Host Nation Support to these additional deployments through the provision of accommodation, technical facilities and training areas.

Estonia will improve its Host Nation Support for the UK surge forces and reinforcement training by building four additional accommodation halls and other necessary support facilities at Tapa Camp by May 2023. In the south of Estonia an additional Reception Staging Onward Movement (RSOM) assembly area will be constructed in 2023 and work will commence for a new permanent camp and enlarged training area.

In other domains, the UK will be providing Baltic Air Policing in Estonia from March to July 2023 using Typhoon aircraft and will contribute to NATO maritime patrols in the Baltics.

Further to the agreements reached today in the Roadmap, the UK and Estonia will continue to work closely with one another across all military domains and explore new areas for cooperation between our two armed forces. We will continue to work closely together through NATO, the Northern Group, and particularly through the JEF, which has become a significant contributor to regional security across its core area of the Baltic Sea, the High North and the North Atlantic. The agreement made today will lead to more UK high-end capabilities deployed to Estonia, more regular deployments of large numbers of high readiness forces, and greater military integration between our two countries. It is a big step forward in helping to guarantee Estonian and wider Baltic Security.

The United Kingdom will periodically deploy helicopters to Estonia as part of enhancing our nations’ deep defence relationship built on shared interests and values. The Defence Secretary Ben Wallace hosted his counterpart Estonian Minister of Defence Hanno Pevkur in London for a meeting, during which the Ministers committed to stronger ties and issued a joint statement. A Guard of Honour welcomed Minister Pevkur on arrival.

The Ministers signed a roadmap which sets out a shared plan to implement commitments made at the NATO Summit in Madrid earlier this year. The roadmap will see a more capable UK presence in Estonia, continuing our commitment to deter aggression and defend European and NATO security.

UK Defence Secretary Ben Wallace said: “The UK’s commitment to Estonia and European defence and security is unwavering. The deployment of assets such as Apache and Chinook helicopters to exercise in Estonia is a clear example of the strength of our relationship, and the importance we place on our ability to effectively operate side by side.”

Estonia Defence Minister Hanno Pevkur said: “In the roadmap, Estonia have committed to start the development of an Estonian warfighting Division which will ensure coordinated use of national and allied forces in the defence of Estonia. This work will be supported by the UK, who are providing training and mentoring through an advisory team and close links with the UK’s 3rd Division.”

The UK has an enhanced forward presence (eFP) Battlegroup in Estonia, and this deployment will be enhanced through divisional-level assets such as short range air defence and multiple rocket launch systems in the country. These will be augmented with periodic deployments of additional capabilities including Apache and Chinook helicopters. The first of these surges will begin January 2023, when Chinook Helicopters will deploy to Estonia.

From April 2023, the UK’s eFP Headquarters in Estonia will be led by a Brigadier, enhancing the HQ’s capabilities. In addition, the UK will hold a Brigade sized force at high readiness in the UK, ready to reinforce Estonia and the Baltics at a time of need. These forces will regularly exercise in Estonia and the first exercise, SPRING STORM [KEVADTORM], is planned for May 2023.

Estonia is supporting these plans by building four additional accommodation halls and other necessary support facilities at Tapa Camp which will be completed before the exercise begins.

Separately, the UK will be providing Baltic Air Policing in Estonia from March to July 2023 using Typhoon aircraft and will continue to contribute to NATO maritime patrols in the Baltics.

Estonia and the UK are both part of the Joint Expeditionary Force (JEF), a group of ten European nations who work together in support of European security.