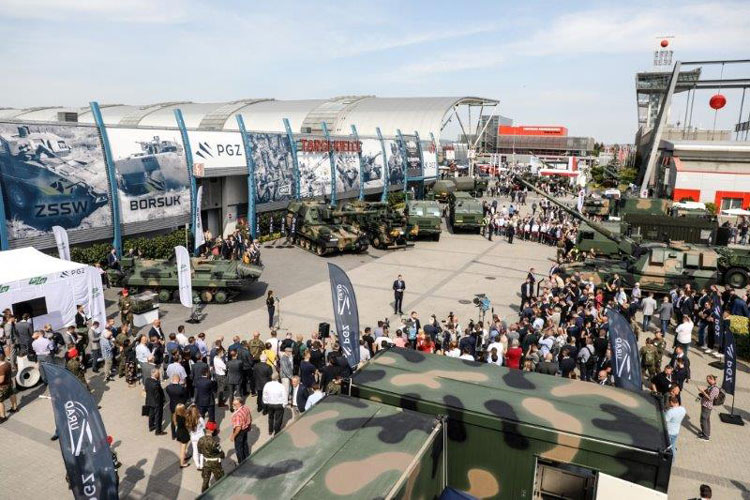 MSPO 2022 was a great jubilee as the Polish International Defence Industry Exhibition celebrated its 30th anniversary in Kielce.

Press Release, Kielce, 16 September 2022: In 2022, the International Defence Industry Exhibition celebrated its 30th anniversary. MSPO 2022 was a record-breaking event in every aspect. Mr Andrzej Duda, the Republic of Poland President, has traditionally granted its auspices to the expo. The Polish Armaments Group has been the Strategic Partner of the International Defence Industry Exhibition.

The Targi Kielce Defence Industry Expo brought 613 companies from 33 countries and a plethora of Polish companies. The trade fair hosted 60 delegations from 39 countries, including eight at the ministerial level. Nineteen thousand guests from all over the world attended MSPO 2022, and another 10,500 visited its Open Day. MSPO was visited by the guest of honour, President Andrzej Duda. In addition to the President, the event was also graced with the presence of Prime Minister Mateusz Morawiecki and Mariusz Błaszczak, Minister of National Defence and Paweł Soloch, the head of the National Security Bureau. The Turkish delegation prepared the Lead Nation Exhibition was chaired by the Minister of National Defence, Hulusi Akar. The commanding staff of the Polish Army also took part in the event.

On the eve of the opening ceremony of the 30th International Defence Industry Exhibition MSPO, President of the Republic of Poland Andrzej Duda visited Targi Kielce and bestowed orders and distinctions to several Kielce Expo Centre’s Employees. For merits in the development of the exhibition sector in Poland, the President of Targi Kielce, Andrzej Mochoń PhD., was awarded the Officer’s Cross of the Order of Polonia Restituta. Vice-President Bożena Staniak was bestowed with the Knight’s Cross of the Order of Polonia Restituta.

“The war made us all realise that the time of peace is over. This fact became an impulse for the development of our domestic defence industry and exceptional care for security. We need to modernise our armed forces rapidly. From this point of view, it was truly visionary to develop this event, i.e. the International Defence Industry Exhibition,” said the President of the Republic of Poland. “I am here for the fifth time, and I am proud of it.”

Jubilee evening gala: Targi Kielce celebrated 30 years of the International Defence Industry Exhibition together with exhibitors and guests of honour. The unique nature of the anniversary event was emphasised by the performance of dancers from the Kielce Dance Theatre, who presented the ‘Unobvious History of Cinderella’ performance. The repertoire choice in the context of the anniversary was not accidental .

There was a special feature film that marked the 30th anniversary – the movie focussed on the history of the defence show. Less obvious beginnings of idea, which date back to the January Uprising, through the Old Polish District and then the Central Industrial District, created many years later, to the controversy surrounding the first edition of the Exhibition. The film also presented the latest MSPO history, which was also full of challenges – the COVID-19 pandemic one of the biggest.

The Turkish orchestra returns to Targi Kielce: KTT’s performance was not the only artistic element of this year’s MSPO. The Turkish Republic’s Lead Nation Exhibition was extra attractive with the performances of the Mehter band, considered to be the oldest military ensemble of this type in the world. On the first day of MSPO, the band performed twice, winning the audience’s recognition. Previously, the band appeared at Targi Kielce in 2013, when Turkey organised the Lead Nation for the first time. This year’s Turkish Exhibition brought together 28 representatives of domestic defence industry.

Important contracts signed during MSPO: On the MSPO eve, the head of the Ministry of National Defence, Mariusz Błaszczak confirmed the contract signing; Stalowa Wola Steel Works, a part of the Polish Armaments Group, and the Armaments Agency, signed a contract for the supply of KRAB self-propelled howitzers with command, dispatchment and staff modules complemented with ammunition vehicles, as well as a training package and logistics. This contract is worth around 3.8 PLN billion. On Tuesday, Mariusz Błaszczak approved seven other contracts between PGZ and the Armaments Agency – PCO signed two agreements with the American REB Technologies and Defense Solutions GT from the United Arab Emirates. The President of Polish Armaments Group, Sebastian Chwałek, and the President of Hyundai Rotem, Lee Yong-bae, signed an agreement on cooperation between the two companies on unmanned land platforms and the commencement of work on the development of next-generation tank technology. The South Korean Hanwha Defense and Polish Armaments Group have signed a memorandum setting out the partnership principles for production, servicing, life cycle costs and future development of K9 self-propelled howitzers, infantry fighting vehicles and multiple rocket launchers.

Defender Gala Awarding Ceremony : One of the last highlights of the International Defence Industry Exhibition was the presentation ceremony of the DEFENDER awards – the distinction is awarded every year by the Kielce defence trade show’s Programme Board and the Jury Panel. The gala was the occasion to bestow the award of the President of the Republic of Poland for the product which best serves the purpose of the RP Armed Forces soldiers’ safety enhancement, other distinctions and a special award of the Vice-President of the Council of Ministers, the Minister of National Defence and a special mention of the Minister of Development and Technology, the Award of the President of Targi Kielce and the Top Design award for the expo stands arrangement. The awarding ceremony also saw the presentation of the Operational Commander of the Branches of Armed Forces, Distinctions of the Commander of Territorial Defence Forces, Awards and Distinctions of the Head of the Inspectorate of Support for the Armed Forces, the Special Distinction of the Programme Board and Awards of the President of Targi Kielce Management Board The companies which have been with the MSPO for 30 years were also honoured and recognised.

The MSPO Open Day is an absolute hit: KRAB artillery howitzers, Leopard tanks, infantry fighting vehicles, Rosomak armoured personnel carriers, and American MRAP Cougar vehicles exhibited during the Open Day of the International Defence Industry Exhibition at Targi Kielce. About 200 units of military equipment and the newest equipment of soldiers are displayed in the A Expo Hall, a part of B Expo Hall and the outdoor exhibition grounds. In total, about 8,300 square metres. There were also combat song concerts and parade drill shows. Despite unfavourable weather conditions, Targi Kielce hosted 10,500 visitors from all over Poland who came for the Open Day.

We look forward to seeing you at Targi Kielce’s 31st MSPO – the International Defence Industry Exhibition. Save the date for 5-8 September 2023.