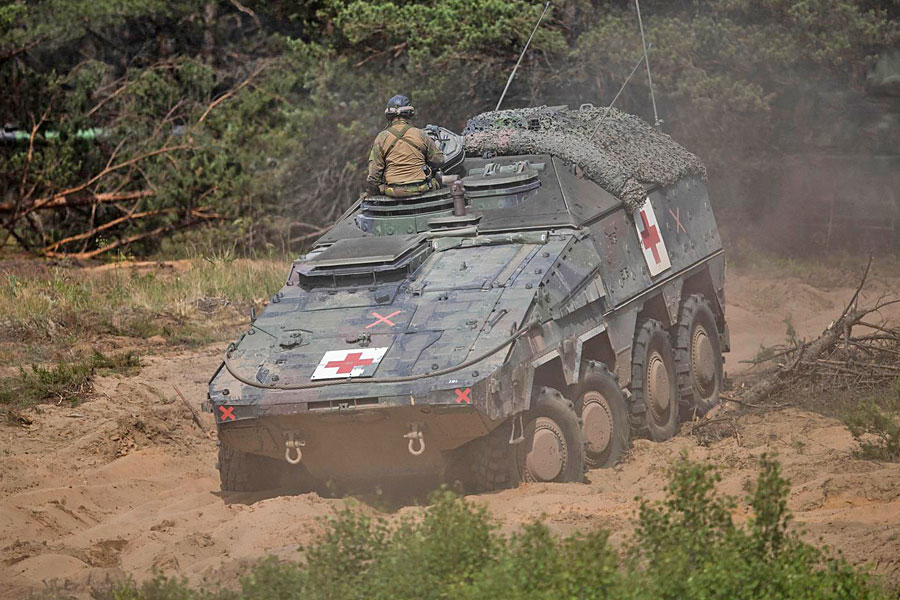 In 2025 the Netherlands will provide Boxer armoured wheeled vehicles to the RDC [Mediacentrum Defensie: Jasper Verolme]

In 2025 the Netherlands will provide an Army unit with Boxer armoured wheeled vehicles and medical support for the EU Rapid Deployment Capacity.

News Release, The Hague, 06 April 2022: In 2025, the Netherlands will provide an Army unit for the EU’s Rapid Deployment Capacity. This unit will consist of 150 troops, Boxer armoured wheeled vehicles and medical support.

The Netherlands will also increase its participation in a number of European missions. Minister Kajsa Ollongren made these announcements today at a Benelux conference in Brussels. The conference focused on the implementation of the goals set out in the Strategic Compass, a document that provides guidance for European security and defence policy over the coming 5 to 10 years.

Ollongren and the defence ministers of Belgium and Luxembourg have assumed responsibility for translating the plans of the Compass into action. In a joint statement, they committed themselves to raising European defence cooperation to a higher level.

The Benelux countries are already cooperating in many areas. Examples in this regard include training, joint materiel procurement and operational deployments. The long-standing cooperation is based on positive experiences and mutual trust. The Benelux countries hope that this cooperation can serve as an example for broader European military cooperation. The ministers stated that Putin’s decision to invade Ukraine acted as a catalyst for European cohesion. According to the statement, “We are more united, resolute and focused on our common interests, both in the EU and in NATO”.

Rapid Deployment Capacity: Ollongren’s commitment to contribute to the Rapid Deployment Capacity (RDC) is one of the concrete steps taken as a result of the Compass. This rapid intervention unit will consist of up to 5,000 troops. Building on the current EU Battle Group, the unit should be operational by 2025, a year in which the Netherlands will work closely with loyal ally Germany, which will be leading the RDC. Luxembourg will provide satellite capabilities for surveillance in space while Belgium will provide a number of niche capabilities.

To properly manage military operations, the EU intends to strengthen the operational headquarters in Brussels. Ollongren stated that the Netherlands would also contribute staff officers to that end.

Price for freedom: According to the minister, the war in Ukraine makes clear that peace and freedom can never be taken for granted. “They come at a price and we should be willing to pay that price. We owe it to our people and our transatlantic partners. Europe must be able to independently defend its freedom, democracy and values. Steps that must be taken to that end include jointly investing in more defence capabilities and strengthening partnerships. The Strategic Compass serves as a guide for such steps.”

Investing even more: The minister stated that the war in Ukraine has made taking major steps more urgent. She referred to Germany, the largest EU member and the first to commit to a massive investment. The Netherlands had already increased the defence budget by EUR 3 billion annually, but that was before Russia’s invasion. Parliament has since called for even more investment. The minister sees the same trend in other European countries. She believes that improving capabilities and readiness will make both the EU and NATO stronger. The aim is for both alliances to cooperate as much as possible, just as they are doing now during the Ukraine crisis. Ollongren also believes, however, that the EU must have the capabilities required to take action independently, certainly when security in its own region is at risk.

The minister said that in the past, Europe emerged stronger from every crisis. “The answer is never less, but rather more integration.”