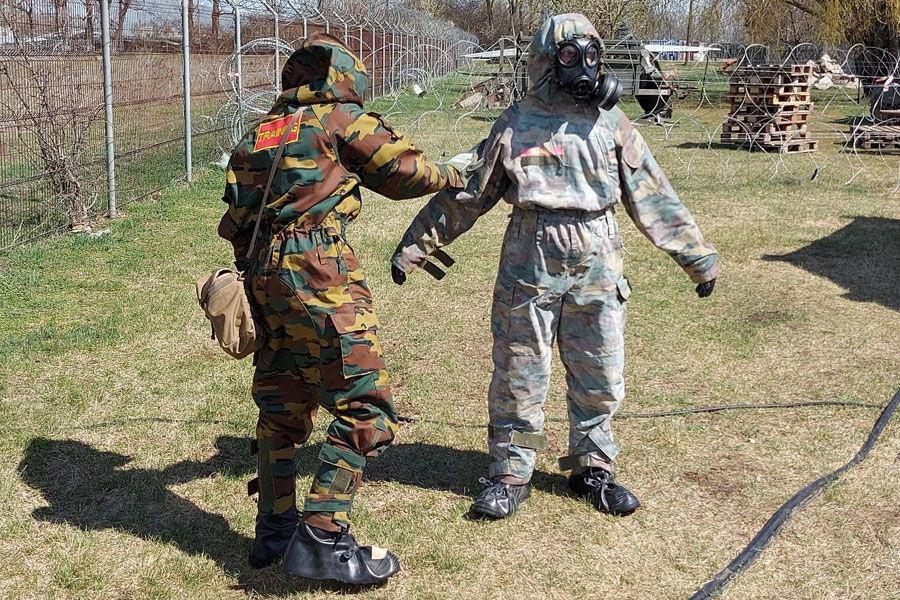 Press Release, Brussels, 04 April 2022: [auto-translated] In response to threats about the possible use of unconventional weapons against Ukraine, Defence has sent two CBRN instructors (Chemical, Biological, Radiological and Nuclear) to Romania where our Belgians from Operation BLACK EAGLE are stationed. These unconventional weapons include biological and/or chemical weapons, for example. Toxic fumes from fires in factories, medical facilities and other fuel and ammunition depots also fall within this risk framework.

As part of CBRN capacity building, Second Lieutenant Cédric and First Sergeant Major Sébastien, both from the Department of Engineers – CBRN Instruction Cell in Amay, came to provide refresher courses in the event of an unconventional attack. These courses consist of an evening theory and a day practice with approximately 30 participants per day. “Despite the annual tests that our soldiers have to undergo and pass to remain operational, nothing is better than good preparation in a real situation,” explains Second Lieutenant Cédric. Chief Sébastien added: “We are using our visit to advise command on additional measures to be taken. Additional equipment has been ordered in Belgium.” The instructors are assisted by the CBRN assistants of the units.

Since March 3, 2022, 300 soldiers, mainly from the 1/3 Lancer Battalion and various support units (logistics, engineers, medical), have been deployed under the command of the 27th French Battalion Chasseurs Alpins. This in the context of the NATO Rapid Reaction Force (NRF) to prove to our allies that Belgium is a reliable, responsible and respected partner in the UN, NATO and the EU. Our country faithfully participates in international coalitions to guarantee security at home and stability at the borders of Europe and NATO.

Defence is not directly involved in this conflict, but as a loyal NATO partner it participates in the Alliance’s defensive efforts.