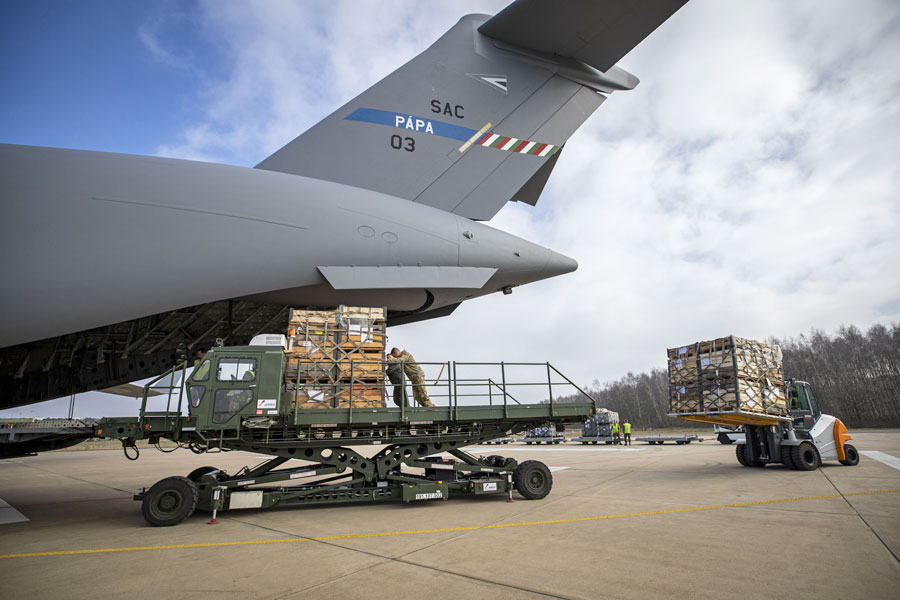 This C-17 has since set off from Eindhoven Air Base, fully loaded [image via Mediacentrum Defensie]

The 50 Panzerfaust 3 anti-tank weapons with 400 rocket-propelled grenades and the 200 Stinger air-defence missiles pledged by the Netherlands yesterday are now on their way to Ukraine. The 100 sniper rifles with 30,000 rounds of ammunition and 2 diving vessels, pledged earlier, are also on board the transport. This military materiel is being transported by a C-17 transport aircraft that departed from Eindhoven Air Base today, bound for a country in Eastern Europe. From there, the materiel will be transported to Ukraine by road. For security reasons, the Netherlands Ministry of Defence will not comment on how the military materiel will reach Ukraine.

The Panzerfaust is a man-portable anti-tank weapon. It can be used against tanks, armoured vehicles, fortified military positions, light bunkers and hovering helicopters. It is compatible with various types of ammunition, and can be used up to a maximum range of 600 metres.

The Stinger is a man-portable infrared-guided air-defence missile. It can be used to protect ground forces and military objects against hostile aircraft flying at low and medium altitude, from a distance of 500 metres up to 5 kilometres.

The two diving vessels mentioned are wire-guided detection robots for the detection of land and sea mines.

In total, there are three SAC C-17 aircraft. They are stationed at Pápa Air Base in Hungary.

Footnote: This news release was circulated by the Dutch MoD on 2nd March.