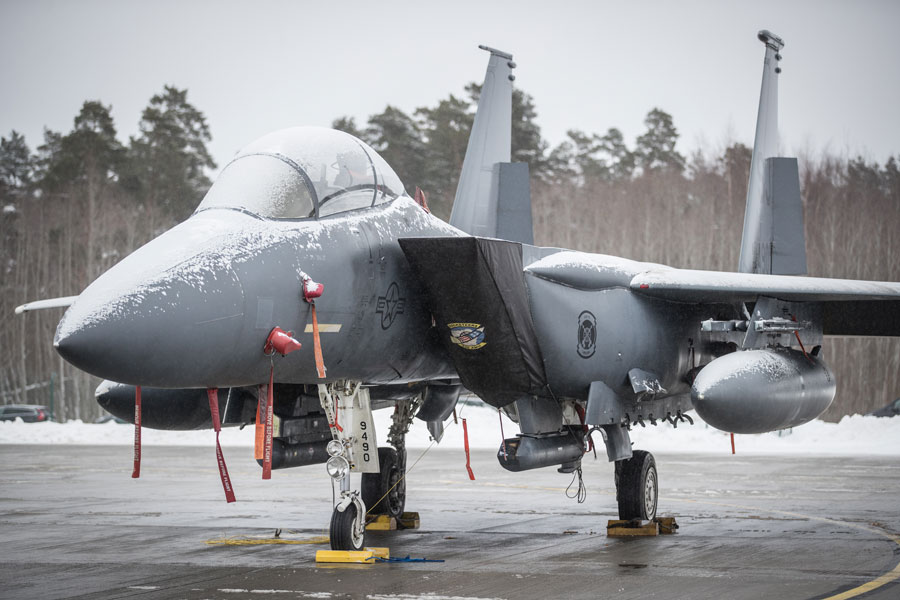 Press Release, Tallinn, 02 February 2022: [auto-translated] As of Wednesday last week, six F-15E Strike Eagle fighters of the United States Air Force will be stationed at Ämari air base. The main goal of the fighters in Estonia is to support the Baltic Air Security Mission with the F-16 fighter jets of the Belgian Air Force, whose rotation began in December last year.

In addition, Danish F-16 fighter jets arrived at the Lithuanian Šiauliai air base last week, performing the same tasks as the Polish F-16 fighter jets there. In the course of the reinforced air security mission, air-to-air and air-to-ground training procedures will be practised with the Allies across the Baltics.

“Our presence here demonstrates NATO’s commitment to NATO’s security, safety and independence as part of NATO. This is the biggest goal of our mission and to ensure enhanced air security with Belgium’s allies, as well as the opportunity to practice integration between Belgian, Estonian and US units. We have had very good experiences with Ämari air base and the Estonians have been very hospitable and our mission has gone great, “said Lieutenant Colonel Taylor Gifford, Commander of the United States Unit in Ämari.

“I am proud to lead this resilient unit, which is fully committed to the integrity of the Alliance’s airspace,” said Major Avi Pierre-Yves Libert, Commander of the Belgian Air Security Unit.

“The presence of Americans is important not only for Estonia, but also for the Alliance as a whole. This shows that NATO takes the current situation very seriously, “said Brigadier General Rauno Sirk, Commander of the Air Force.

NATO members allocate certain parts of their airspace to air force exercises and drills, including low-flying operations. The governments of the Baltic states have also set aside areas in their airspace for low-cost flights. Low-cost flights are performed in agreement with the Civil Aviation Service and the Air Traffic Services Limited Liability Company.

Press Release, Tallinn, 31 January 2022: [auto-translated] On Saturday morning, a Russian Air Force SU27 plane entered Estonian airspace in the Vaindloo Island area without permission. The plane was in Estonian airspace for less than a minute.

The plane did not have a flight plan, the plane’s transponder was turned off. The aircraft also did not have two-way radio communication with the Estonian air traffic service.