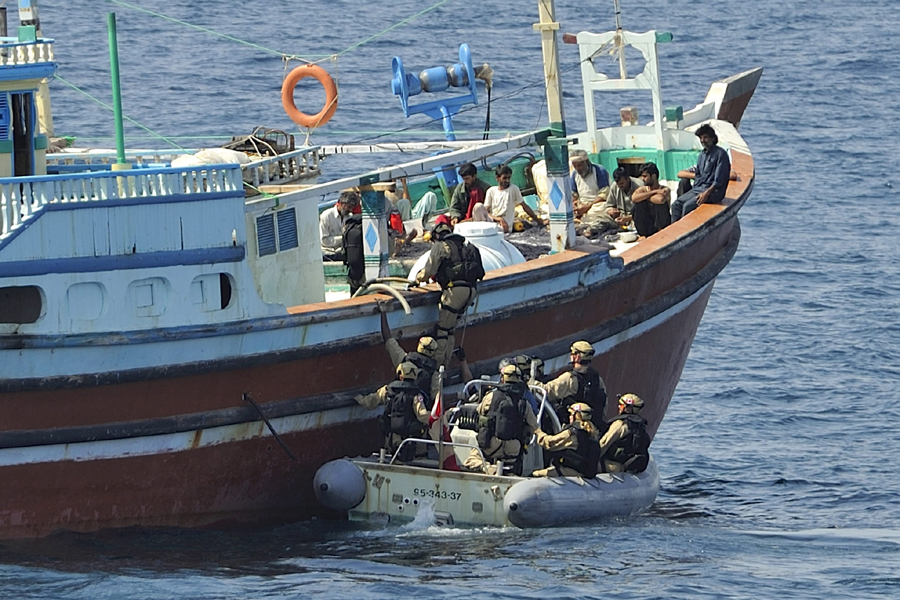 A total of 34 counter-narcotics seizures occurred during Canada’s command of CTF 150, yielding more than 55 000 kg of illicit narcotics and setting records for the number of interdictions and amounts seized by CTF 150. A single interdiction by HMCS Calgary that seized over 1,200 kg of heroin was the largest heroin bust in CMF’s history. Calgary’s 17 drug busts also set a record for the number of seizures made by single ship serving with CMF, with a wholesale value of the seized narcotics being in excess of $90 million (USD).

Commanding CTF 150 reflects Canada’s commitment to work with its partners to tackle the global terrorist threat and demonstrates the confidence of our allies and coalition partners in the CAF’s ability to lead multinational forces.

“As Canada relinquishes command of CTF 150 to the Royal New Zealand Navy, I am grateful for the contributions of our international partners at Combined Maritime Forces. We were fortunate to enjoy the support of the US, UK, France and Pakistan during our command, allowing our task force to successfully cover an expansive and complex area of operations. I would be remiss not to highlight the impact our own Royal Canadian Navy and Royal Canadian Air Force assets had on our mission at sea and in the air. Having the direct support of HMCS Calgary and a CP-140 long range patrol aircraft was one of the highlights of our mission. Finally, I cannot overstate my thanks to the combined Canadian-Australian CTF 150 team and their stalwart dedication to our mission. As I hand over command to the Royal New Zealand Navy, I wish them success on this extremely important mission.” Commodore Dan Charlebois, Outgoing Commander Combined Task Force 150

“I wish to congratulate Commodore Charlebois and his staff from the Royal Canadian and Australian navies; they have achieved outstanding results during their time in theatre. Their professionalism, dedication and attention to detail has seen Combined Task Force 150 make a tangible and positive contribution to the mission. Under Canadian leadership, CTF 150 has seized approximately $160 million USD worth of narcotics and prevented illegal trade and activities that fund terrorism. These collective actions have undoubtedly deterred illicit activity within the area of operations, and thereby improved the overall prosperity, security, and stability within the region.” Captain Brendon Clark, Incoming Commander Combined Task Force 150

“The record-breaking performance of the Canadian Armed Forces on Operation ARTEMIS under the command of Commodore Charlebois speaks to the professionalism and expertise of our military. This demonstrates once again that the trust of the international community is well-placed in the Canadian Armed Forces and our commitment to our allies and partners. By increasing stability in the region and protecting legitimate trade, the threat of criminal and terrorist activities is reduced both in the Middle East and further abroad.” Vice-Admiral Bob Auchterlonie, Commander Canadian Joint Operations Command