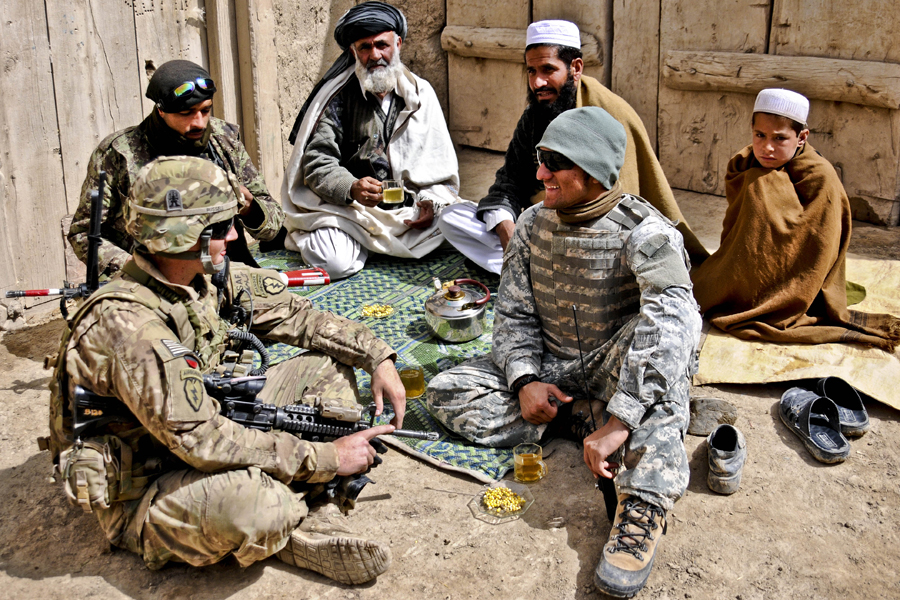 A platoon leader assigned to Company B, 3rd Battalion, US 509th Infantry Regiment sits with his interpreter, an Afghan soldier, and residents during a shura with leaders in a village in Afghanistan in March 2012 [US Army: SSgt Jason Epperson]

President Joe Biden has announced full US troop withdrawal from Afghanistan by the 20th anniversary of the September 11 attacks on America.

DoD News Release, Washington, 14 April 2021: President Joe Biden said the war in Afghanistan was never meant to be multi-generational, as he officially announced the drawdown of all 2,500 US troops in that country beginning May 1 and concluding by Sept. 11, the 20th anniversary of the war.

The president lay the path for the way forward in Afghanistan today in an address to the nation and noted that only the citizens of Afghanistan have the right and responsibility to lead their country.

“After consulting closely with our allies and partners, with our military leaders and intelligence personnel, with our diplomats and our development experts, with the Congress and the vice president, as well as with [Afghan President Ashraf Ghani] and many others around the world, I concluded that it’s time to end America’s longest war. It’s time for American troops to come home,” the president said.

The United States met its objective 10 years ago with the assassination of Taliban leader Osama bin Laden, he said, adding since then, “Our reasons for staying have become increasingly unclear.”

Over the past 20 years, “the [terrorist] threat has become more dispersed, metastasizing around the globe: al-Shabab in Somalia, al-Qa’ida in the Arabian Peninsula, ISIS attempting to create a caliphate in Syria and Iraq and establishing affiliates in multiple countries in Africa and Asia,” he said of the terrorism threat.

“With the terror threat now in many places, keeping thousands of troops grounded and concentrated in just one country and across the billions [of dollars spent] each year makes little sense to me and to our leaders,” Biden said. “We cannot continue the cycle of extending or expanding our military presence in Afghanistan — hoping to create ideal conditions for the withdrawal and expecting a different result.”

As the fourth US president with the Afghanistan war on his watch, Biden said he would not pass the longest war in American history on to another president. He noted that he inherited the drawdown deadline of this year and he intends to keep the US agreement with the Taliban, which was formulated during the former administration.

But the United States will withdraw its troops in a safe, deliberate and responsible manner and in full coordination with its partners and allies in Afghanistan, the president said. Diplomacy and counter-terrorism mechanisms will be reorganized to hold the Taliban accountable, Biden said.

Meeting critics of the drawdown head-on, the commander in chief said the withdrawal will not hurt the country’s reputation. The United States will be more formidable if it focuses on future challenges, and not those in the past, he said. “Our diplomacy does not hinge on having boots in harm’s way — US boots on the ground. We have to change that thinking. American troops shouldn’t be used as a bargaining chip between warring parties in other countries. You know, that’s nothing more than a recipe for keeping American troops in Afghanistan indefinitely.”

The challenges the United States must focus on are in front of us, Biden said. “We have to track and disrupt terrorist networks and operations that spread far beyond Afghanistan since 9/11. We have to shore up American competitiveness to meet the stiff competition we’re facing. From an increasingly assertive China, we have to strengthen our alliances and work with like-minded partners to ensure that the rules of international norms that govern cyber threats, and emerging technologies that will shape our future are grounded in our democratic values, not those of the autocrats,” he said. “We have to defeat this pandemic and strengthen the global health system to prepare for the next one, because there will be another pandemic. [We’ll] be much more formidable to threat adversaries and competitors over the long term, if we fight the battles for the next 20 years, not the last one.”

The president said he is immensely grateful for the bravery and backbone US service members have shown through nearly two decades of combat deployments. “We, as a nation, are forever indebted to them, and to their families. … And we owe them. They’ve never backed down from a single mission that we’ve asked of them. They paid a tremendous price on our behalf. And they have the thanks of a grateful nation,” Biden said.