Visit to NATO HQ by the Foreign Minister of Ukraine 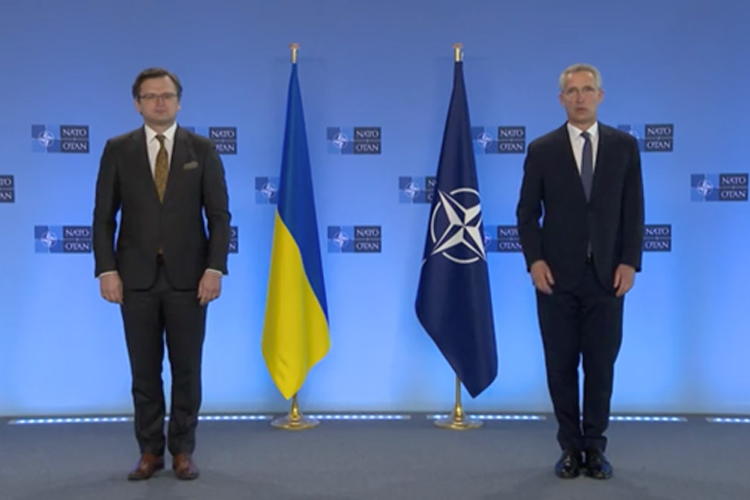 NATO Secretary General Jens Stoltenberg welcomed Ukrainian Foreign Minister Dmytro Kuleba to NATO Headquarters on Tuesday (13 April 2021) for a meeting of the NATO-Ukraine Commission on the security situation in and around Ukraine. “Russia’s considerable military build-up is unjustified, unexplained, and deeply concerning,” said the Secretary General.

He called on Russia to end this military build-up, stop its provocations and de-escalate immediately. The Secretary General also reiterated NATO’s unwavering support for Ukraine’s sovereignty and territorial integrity. He underlined that NATO will continue to provide significant political and practical support to Ukraine.

Welcome back to NATO Headquarters. It is always great to see you. And thank you for coming to the NATO Headquarters today to participate in the NATO-Ukraine Commission to discuss the security situation in and around Ukraine.

We are seriously concerned by ongoing developments.

And NATO is monitoring the situation very closely.

In recent weeks, Russia has moved thousands of combat-ready troops to Ukraine’s borders.

The largest massing of Russian troops since the illegal annexation of Crimea in 2014.

Over the last days, several Ukrainian soldiers have been killed in eastern Ukraine.

I want to express my condolences for the recent losses suffered by the Ukrainian Armed Forces.

Russia must end this military build-up in and around Ukraine.

We regret Russia’s decision not to participate in the recent meeting at the OSCE to dispel concerns about its unusual military activities.

Russia must respect its international commitments.

NATO’s support for Ukraine’s sovereignty and territorial integrity is unwavering.

We do not, and will not recognise Russia’s illegal and illegitimate annexation of Crimea.

We continue to call on Russia to end its support for the militants in eastern Ukraine and withdraw its forces from Ukrainian territory.

Allies continue to provide significant practical support so that Ukraine can better provide for its own security.

Ukraine’s new status as an Enhanced Opportunities Partner demonstrates how both sides benefit from our long-standing partnership.

We are helping to strengthen capabilities, including with training for the Ukrainian armed forces.

We have stepped up our cooperation in the Black Sea region with more exercises and port visits.

And we support Ukraine’s wide-ranging reform agenda, which will make Ukraine more resilient.

Allies stand by the decisions taken at the Bucharest summit.

We want to see Ukraine succeed.

We are committed to helping you to do so.

So Minister Kuleba, once again welcome to NATO.

It’s great to see you here.

NATO Spokesperson: Thank you very much. We have time for a few questions virtually we’ll first go to Jonah Fisher of the BBC in Kiev.

Jonah Fisher: Hello, thanks for taking questions from me. To NATO Secretary General, what would you say to people who say that all this talk of support and warnings and serious concern, are just words and likely to be ignored. And to Ukraine’s Foreign Minister, what sort of things do you think Russia needs to see from NATO countries; because you made it clear that you’d like to see more than just words.

NATO Secretary General: What we have seen since 2014 is that NATO allies and NATO has provided significant support to Ukraine, in many different ways. We express strong political support for Ukraine’s territorial integrity and sovereignty, but the NATO allies and NATO also provide practical support, we help them to build their defence and security institutions, we help them to modernise their armed forces with the reforms and NATO allies also provide training, support with training, exercises, participating in joint exercises, and also supporting in other different ways.

So what we have seen is that NATO and Ukraine have developed a partnership, which is strong, which has been strengthened over the last years also by granting Ukraine, the special status as an Enhanced Opportunity Partner, and we have also increased presence in the Black Sea region in the Black Sea, with more naval presence and more ships, more port visits, and we are constantly looking into how we can continue to step up and provide more practical support to Ukraine, to help them defend themselves.

Let me also add that, after the illegal annexation of Crimea back in 2014, and the continued de-stabilisation of eastern Ukraine by Russian backed separatists, NATO allies have also responded by increasing the readiness of our forces, for the first time of the year so cutting defence spending, all allies are investing more in defence, and we have increased also our presence, military presence, in the eastern part of the Alliance, in the Black Sea region but also in the Baltic region.

All of this was done as a response to Russia’s aggressive actions against Ukraine. And on top of that, of course NATO allies have in different ways also imposed economic sanctions on Russia. So, this is a support which is demonstrated not only words but also in deeds, and during the meeting today we will of course discuss how we can further strengthen our partnership, and I can further demonstrate the strong support of NATO allies and NATO to Ukraine.

Ukraine Foreign Minister: Strategically, Russia has to understand that Ukraine belongs to the world of democracies, to the Western world, and the West will not allow Russia to shatter Ukrainian democracy and sovereignty. This is the message, the very clear and very simple message, that our friends and partners can convey to Russia. Ukraine is not part of the Russian world and will never be considered as such.

At the operational level, we need measures, which will deter Russia, and which will contain its aggressive intentions. This could be, as Secretary General mentioned, a new round of sanctions, which would raise the price of Russian aggression. This could be a direct support, aimed at strengthening Ukraine’s defence capabilities, because we do know that Russia spares no effort to prevent third countries from cooperating with Ukraine, in the defence sector. Russia is working hard to undermine our defence capabilities.

There is only one thing that I really would like to highlight here. The price, some measures, which we are talking about, may look costly, but the price of prevention, will still be lower than the price of stopping the war and mitigating its consequences. So it’s better to act now to prevent Russia from further escalating the situation.

Iryna Somer: Thank you Oana. Secretary General, you already mentioned, the status of Enhanced Opportunity Partner. I would like to know because already, it’s almost a year since NATO granted, this status to Ukraine. What kind of additional value the Kiev participation in this programme, brings to Alliance.

And Minister, can you please tell us what already has become an important in this programme for Ukraine. Thank you.

NATO Secretary General: The Enhanced Opportunity Partnership is an important partnership and it demonstrates the value that NATO allies attached to the partnership with Ukraine.

Ukraine Foreign Minister: EOP is a very practical instrument, and it’s a very valuable one. I would like to take this opportunity to thank the Secretary General and allies for granting us this status.

EOP will help to significantly increase interoperability between Ukrainian armed forces and defence sector as such, with the defence sector of NATO. We already launched a number of activities within the framework of the EOP.

I believe that the current escalation by the Russian Federation in the east, demonstrates that Ukraine and NATO have to exploit the possibilities, opportunities provided by EOP as soon as possible. And we have to step up our efforts without any delay to fill EOP with new joint activities.

Gro Holm: One question for the Secretary General Jens Stoltenberg first. Is it possible for Ukraine to become a full NATO member, as long as it doesn’t control its own territory fully, like Crimea, and to also certain extent, the eastern Ukraine?

And then question for the Foreign Minister; how far do you think, do you perceive, that Russia is willing to go, sending its own soldiers and military equipment to eastern Ukraine in the situation that we see now. Thank you.

NATO Secretary General: It is for the 30 NATO allies to decide when Ukraine is ready for NATO membership and no one else has any right to try to meddle or to interfere in that process.

It’s a sovereign right of every nation like Ukraine to apply for membership, but that is the right for the 30 allies to decide when membership is going to be offered. This is an important principle because Russia is now trying to re-stablish some kind of sphere of influence, where they try to decide what neighbours can do.

That is a world we really try to leave behind. Those were big powers could decide what the small neighbours could do. So therefore we strongly support the sovereign right of Ukraine to apply, and to decide its own path, and then for the 30 allies, and only the 30 allies, to decide when the standards are met.

That’s also the reason why we are supporting efforts of Ukraine to reform, and modernize, reform is the only path, the best way towards further Euro Atlantic integration, and we strongly reject the idea that we hear from Moscow that Russia has a kind of veto, a right to deny other countries, the sovereign right to decide its own path, including what kind of security arrangements they want to be part of, including a membership of NATO.

Ukraine Foreign Minister: In 2008, at the Bucharest summit NATO made a promise to Ukraine and Georgia.

And we do believe that the Alliance is the institution that can be trusted, that keeps its promises. For us NATO membership of Ukraine is a matter of time. And there are no other criteria, which have to be met when it comes to the relations with Russia.

Back in 2014, it was unimaginable that Russia would go as far as occupying Crimea and Donbass. I would like to recall that the initial plan of Russian strategies, was to cut Ukraine in half, and create a political entity called New Russia, Novorossiya. This plan failed, due to the effective countermeasures taken by the Ukrainian state, and the sacrifice of our soldiers and officers.

Partners including NATO allies, played an important role in helping Ukraine to stop Russia, where it stands now. So when you ask me how far Russia can go, my answer to you, I cannot exclude anything, but I still believe that we have all tools available, not only to prevent Russia from making a single step forward, but also to make it withdraw from the occupied territories of Ukraine.

Ukraine will re-establish its sovereignty and the entire security space in that part of the Euro Atlantic region will therefore be strengthened.

NATO Spokesperson: Thank you very much, this concludes this Press Point. Thank you.