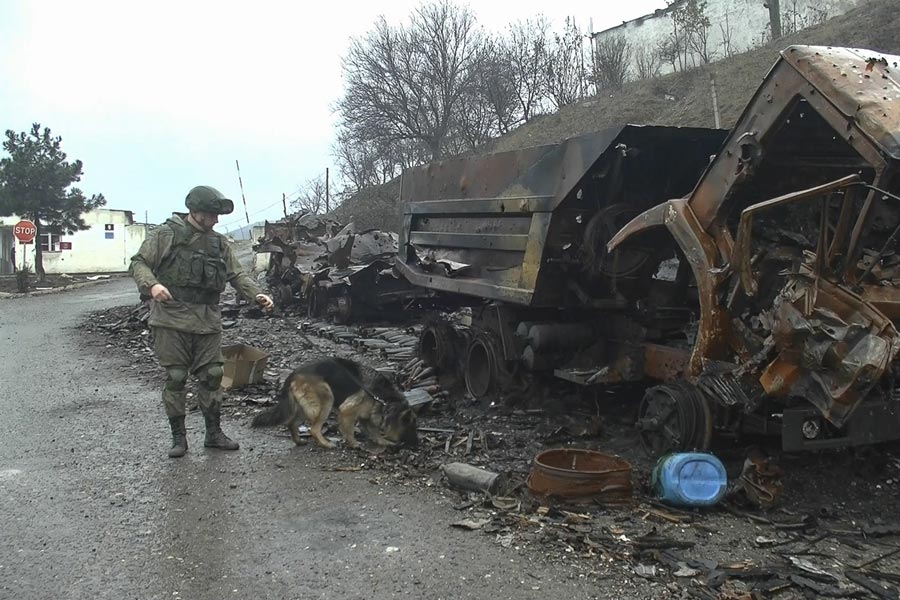 Russian peacekeeping forces specialists have neutralised more than 1,300 explosive objects in the territory of Nagorno-Karabakh in one day.

As of 18 December 2020: [Auto-translated] Servicemen of the International Mine Action Center of the Russian Ministry of Defense continue to work on engineering reconnaissance and mine clearance in the area of responsibility of the Russian peacekeeping forces in Nagorno-Karabakh.

The servicemen involved in mine clearance are equipped in modern sapper protective suits and are equipped with modern means of searching for explosive objects – mine detectors IMP-S2 and searchers INVU-3M. In the course of engineering reconnaissance, mine detection dogs are used.

During the day, engineering reconnaissance and demining of the area in the city of Stepanakert were carried out. 21.8 km of roads were cleared, 1,334 explosive objects were found and removed for destruction. In total, during demining in Nagorno-Karabakh (since November 23, 2020), about 195 hectares of territory, about 87 km of roads, 423 housing buildings have been cleared of unexploded ordnance, more than 73,500 explosive objects have been discovered and neutralised.

Discovered explosive objects and unexploded ammunition are removed and destroyed at a specially equipped landfill. Ammunition that cannot be evacuated is destroyed on site with all necessary security measures in place.

In accordance with the agreements specified in the joint statement of the President of the Russian Federation, the President of the Republic of Azerbaijan and the Prime Minister of the Republic of Armenia, from 00:00 hours Moscow time on November 10 of this year a complete ceasefire and all hostilities in Nagorno-Karabakh have been declared. With the assistance of Russian peacekeepers in the areas affected by the war, the restoration of vital engineering communications continues.

Source: Department of Information and Mass Communications of the Ministry of Defense of the Russian Federation

Featured, Mine Clearance, Nagorno-Karabakh, Stepanakert
You may also like