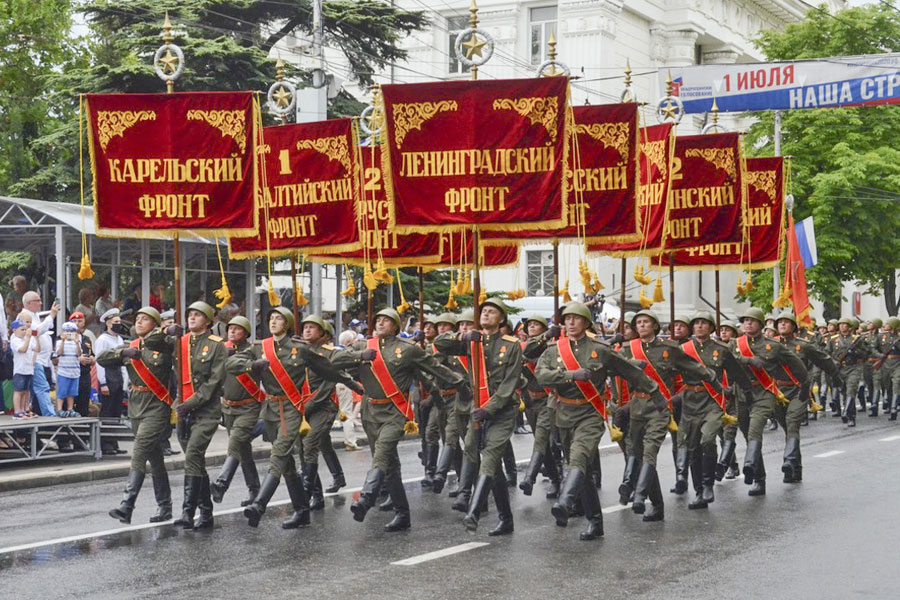 In Sevastopol a parade was held in honour of the 75th anniversary of Victory in the Great Patriotic War – one of several Russian commemorative events held today.

Auto-translated: On June 24, in Sevastopol, as part of the celebration of the 75th anniversary of the Victory in the Great Patriotic War, a parade of troops of the Sevastopol garrison took place with the passage of a foot parade, the passage of aircraft, the passage of historical equipment from the time of the Second World War and a modern mechanised column.

During the Victory Parade, the military service of the Black Sea Fleet military command bodies, crews of ships from the Crimean Naval Base, personnel of the Naval Aviation and Air Defence of the Black Sea Fleet, military personnel of the army corps, fighter aviation and anti-aircraft took place in a solemn formation with a military greeting to the honourable tribune of veterans missile regiments of the Air Force and Air Defense of the Southern Military District, cadets of the P.V. Nakhimov ChVVMU, ceremonial calculations of the units of the Russian Guard and the Ministry of Emergency Situations of the Russian Federation (EMERCOM), as well as Nakhimov’s and combined parade company of schoolchildren from the All-Russian military-patriotic public movement ‘Yunarmiya’ . Also, after a five-year break in the parade, a company of servicemen — women from the military units of the fleet — passed.

The mechanised convoy consisted of almost 90 units of military equipment, including military vehicles of the Great Patriotic War period, and 26 aircraft took part in the air part of the parade.

In total, about five thousand troops of the Black Sea Fleet took part in the celebration of the 75th anniversary of the Victory in the heroic cities of Sevastopol, Kerch, Novorossiysk and the capital of the Republic of Crimea – Simferopol.

In preparation for the celebrations in all their venues, a set of sanitary and anti-epidemiological measures was carried out aimed at eliminating the introduction and spread of infectious diseases. Each soldier was tested for coronavirus infection before being included in the parade.

75th Anniversary, Crimea, Featured, Russia, Sevastopol, Victory in the Great Patriotic War
You may also like