Flankers Harass Poseidon Over The Med 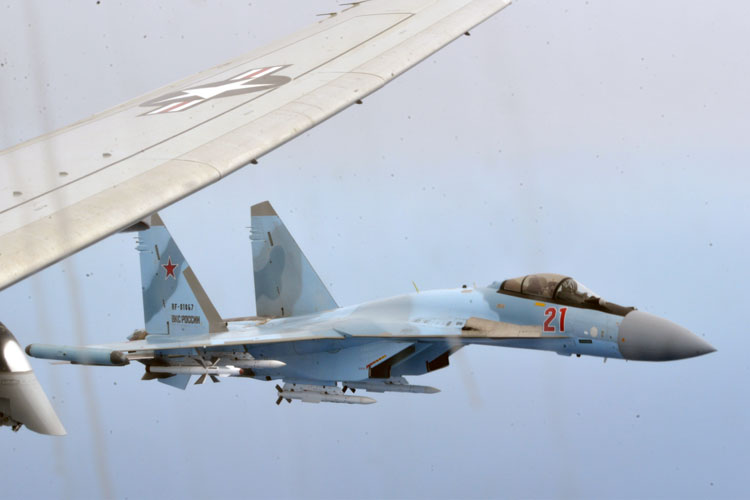 The US Navy has released air-to-air images of two Russian SU-35 Flankers harassing a Boeing P-8A Poseidon Maritime Patrol Aircraft over the Mediterranean.

US Navy Release, 27 May 2020: Two Russian Su-35 aircraft unsafely intercepted a P-8A Poseidon patrol aircraft assigned to US 6th Fleet over the Mediterranean Sea May 26, 2020.

The intercept was determined to be unsafe and unprofessional due to the Russian pilots taking close station on each wing of the P-8A simultaneously, restricting the P-8A’s ability to safely manoeuvre, and lasted a total of 64 minutes. US 6th Fleet, headquartered in Naples, Italy, conducts the full spectrum of joint and naval operations, often in concert with allied and inter-agency partners, in order to advance US national interests and security and stability in Europe and Africa.

Editor’s Comment: Data associated with these US Navy images, released this morning, appears to confirm they are genuine. While the Russian Air Force has every right to fly and train in international airspace over the Mediterranean if complying with internationally agreed Air Safety procedures, their fighter pilots have no business flying so dangerously close to what is effectively just a militarised version of the Boeing 737 airliner. We would be interested to hear the official Russian Air Force rationale behind these alleged manoeuvres.