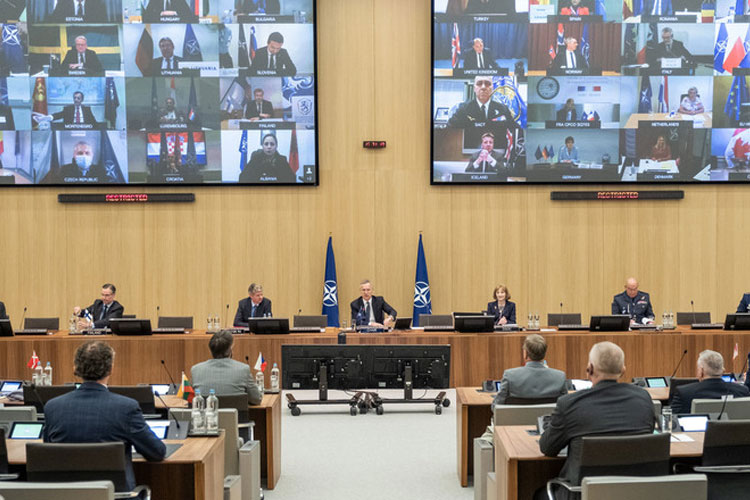 NATO Defence Ministers met today by secure video conference to decide the Alliance’s next steps in the fight against the COVID-19 crisis.

Speaking after the meeting, NATO Secretary General Jens Stoltenberg said, “The crisis has shown that our nations are resilient and united. Our militaries are already playing a key role in support of national civilian effort. And using NATO mechanisms, Allies have been helping each other to save lives.”

NATO’s Supreme Allied Commander Europe, General Tod Wolters, is coordinating military support to deal with the virus. This includes matching requests for support with offers from Allies and partners, and coordinating NATO’s unique strategic airlift capability, which is delivering hundreds of tons of urgently needed equipment to where it is needed quickly and efficiently.

Ministers discussed the importance of countering increasing levels of disinformation and propaganda by state and non-state actors. Allies are working closely together to identify, monitor and expose these lies.

Ministers also considered the long-term implications of the crisis for NATO, its operations and its core mission to protect its almost one billion citizens. NATO is committed to ensuring this health crisis does not develop into a security crisis by maintaining a strong deterrence and defence.

NATO defence ministers today met over video conference where they discussed how the Alliance can continue to protect its almost one-billion citizens, as it has done for over 70 years, during the COVID-19 crisis. Defence Secretary Ben Wallace reaffirmed the UK’s support for NATO’s role in the international response to the crisis and committed to examining all requests for assistance from Allies.

One current priority is combatting the spread of harmful, false and misleading narratives through disinformation. To bolster this effort, the British Army will be deploying two experts in countering disinformation for the formation of NATO’s COVID-19 Communications Hub. They will advise and support NATO in ensuring its citizens have the right information to protect themselves and its democracies are protected from malicious disinformation operations used by adversaries.

Defence Secretary Ben Wallace said: “NATO can play a key role in the international fight against COVID-19, and Allied solidarity is more important than ever to ensure both the security and the health of our almost one-billion citizens.”

In discussions with fellow defence ministers, Mr Wallace also underlined the importance of NATO continuing its core work of defence and deterrence against enduring threats and any that might emerge as a result of the crisis. The UK continues to play a leading role in that work. In Estonia, there are 800 troops deployed as the framework nation of the enhanced Forward Presence initiative which provides reassurance to NATO Allies. In Lithuania, the Royal Air Force is contributing to the NATO Baltic Air Policing mission, protecting the airspace of our Allies.

The UK will continue to work with its Allies in NATO, partner countries and beyond, to galvanise a stronger global effort; to coordinate public health measures; to increase the resilience of the most vulnerable health systems; and to restore business confidence and protect jobs. In an example of NATO Allies working together, last week 250,000 items of PPE, including 50,000 N-95 face masks; 100,000 surgical masks; and 100,000 protective suits, were delivered from Turkey to RAF Brize Norton in Oxfordshire. NATO’s Rapid Air Mobility process, which makes it possible for Allies to move essential items by air between each other as quickly as possible, helped to facilitate the delivery. Mr Wallace expressed gratitude to Turkey for the delivery and to Germany, which has also sent 60 ventilators to the UK in a further show of solidarity.