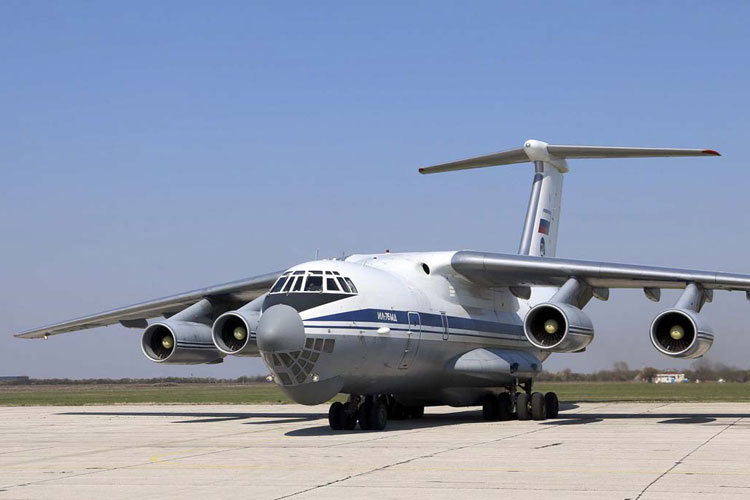 Russian MoD News Release, 04 April 2020: The Russian Aerospace Forces completed the operation to transfer to the Republic of Serbia Russian military specialists, the necessary equipment and machinery to assist Serbia in the fight against the spread of Coronavirus infection.

For these purposes, the crews of military transport aircraft Il-76 of the Russian Aerospace Forces completed eleven flights from the Chkalovsky airfield (Moscow region) to the Batainitsa airfield, located 20 kilometres northwest of Belgrade (Republic of Serbia). 87 servicemen of the Russian Ministry of Defence, including military physicians, specialist virologists of the NBC protection troops, special medical equipment, protective equipment and 16 pieces of military equipment, were delivered to the Republic of Serbia.

On April 4, in Belgrade, at the base of the military medical academy of the Serbian military department, a meeting will be held with the participation of representatives of the Ministry of Health and the Ministry of Defence of Serbia, at which the most priority objects for the work of Russian military specialists and the arrived equipment will be determined. The day before, the first consultations of Russian and Serbian military experts took place at the Batainitsa airfield to identify possible areas of application for Russian aid that arrived in Serbia, at which it was proposed to use Russian medical and nursing teams in the settlements of the Republic of Serbia with the most difficult epidemiological conditions – Belgrade, Chupria, Valjevo, Novi Sad, Nis, Kragujevac, Kikinda.

It is planned to use the specialists of the NBC protection troops to disinfect a military camp in the city of Bachka Pola, where cases of the Coronavirus of Serbian military personnel have been detected.

News Release 03 April 2020: The Serbian Defence Minister thanked Russia for the assistance of Russian Armed Forces specialists in the fight against the spread of Coronavirus infection

“This cooperation shows that now Serbia will never be alone anymore. Presidents Alexander Vucic and Vladimir Putin really became friends, and in this difficult situation, when COVID-19 really covered the whole world, Russia is helping Serbia. Useful resources that Russia could use at home, it gave to Serbia so that we could fight this disease, ” Alexander Vulin said.

News Release 03 April 2020: The first plane arrived in Serbia with a group of Russian military specialists and equipment for disinfection measures

The first Il-76 military transport aircraft of the Russian Aerospace Forces with an advanced group of Russian military specialists and equipment for epidemiological diagnostics and disinfection actions arrived at the Batajnica airfield (20 kilometres Northwest of Belgrade, Republic of Serbia). After clarifying and agreeing with the Serbian side areas of deployment, teams of military doctors and virologists of the Russian Defence Ministry will begin to perform tasks to help Serbia in the fight against the spread of Coronavirus infection.

On behalf of the Supreme Commander-in-Chief of Russian Armed Forces Vladimir Putin, Defence Minister, General of the Army Sergei Shoigu ordered to create the aviation group for operational delivery of Russian military specialists to support the Republic of Serbia in the fight against Coronavirus, starting from April 3.

Eight medical teams equipped with modern medical equipment and property, as well as a team of NBC protection specialist are concentrated and ready for the transfer to Serbia by IL-76 aircraft of the Russian Aerospace Forces. This teams designed to carry out disinfection events with complexes of analysis of pathogenic materials, aerosol disinfection of vehicles, buildings and structures and the necessary supply of disinfectants.

For the transfer of personnel and equipment, it is planned to carry out 11 aircraft flights of the military transport aviation of the Russian Aerospace Forces, who will deliver to the Republic of Serbia 87 servicemen, including military physicians, specialist virologists of the NBC protection troops, special medical equipment, protective equipment and 16 pieces of military equipment.