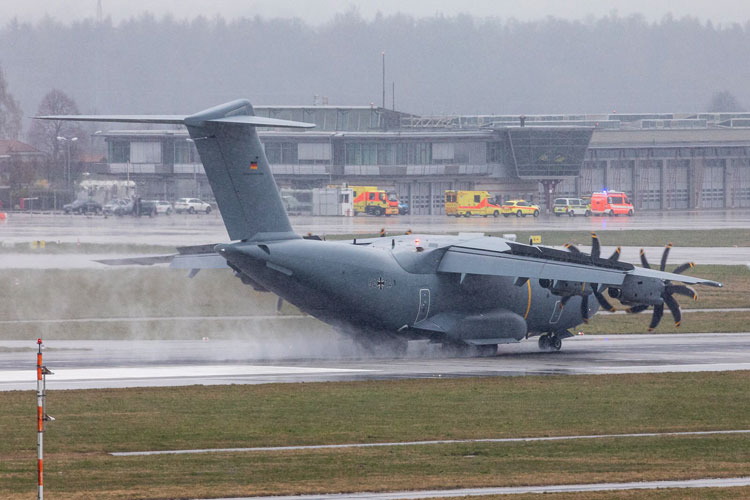 The Bundeswehr is bringing Corona patients from Italy and France to Germany and, together with Croatia, is boosting medical services for NATO troops in Lithuania.

German MoD Press Release, Berlin, 29 March 2020: [auto-translated] The Corona Crisis is hitting our allies in Italy and France particularly hard these days. The Bundeswehr has therefore participated in support. Over the weekend, several patients with particularly serious illnesses were brought to Germany for treatment. For this purpose, an Airbus A310 equipped as a ‘flying intensive care unit’ flew twice to Italy, and an Airbus A400M air force transport plane flew to France, also prepared for medical evacuation operations (MedEvac).

For Defence Minister Annegret Kramp-Karrenbauer, it goes without saying that “in times of need we stand by our friends and allies”. The minister sees the German support as an “important sign of solidarity”. This ‘cross-border solidarity’ is also praised by the French Defence Minister. Florence Parly thanked the German side and stressed the strong friendship between the countries. Italy’s Defence Minister Lorenzo Guerini also explicitly praised German help in the crisis.

NATO troops of the enhanced Forward Presence in Lithuania are also affected by Corona infections. To ensure the best possible medical care, the German Armed Forces, together with Croatia, have sent additional medical personnel to the Baltic States. The Croatian allies provided a government plane especially for this purpose, which during a stopover in Berlin also took on physicians from the Bundeswehr. Defence Minister Kramp-Karrenbauer thanked her Croatian colleague Damir Krstičević for the initiative and “the common concern for our soldiers”.

Meanwhile, a soldier of the Bundeswehr who tested positive for Corona was flown out of Lithuania in a Dutch transport aircraft. He is being treated in the Bundeswehr hospital in Koblenz.

Due to the close and trusting cooperation with the allies, also and especially in times of crisis, the German Minister of Defence sees her opinion confirmed that friends stand together, because: “Together we are stronger”.