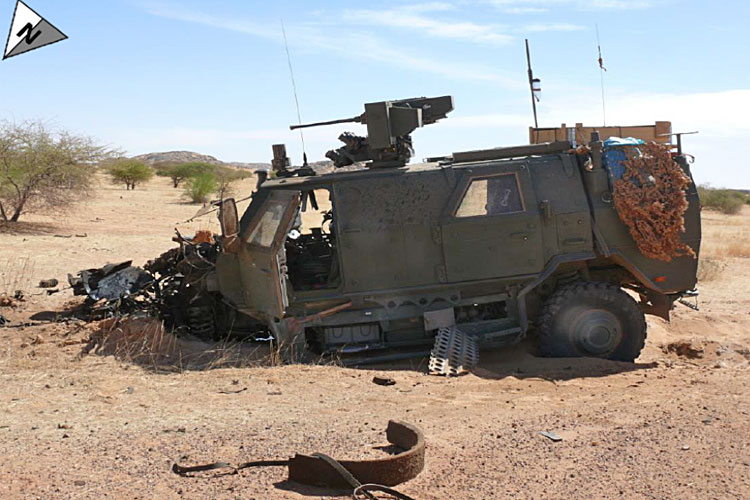 Eight United Nations peacekeepers serving with MINUSMA in Mali have survived an IED blast which destroyed the Belgian DINGO II they were travelling in.

Belgian MoD News Release, 13 January 2020: [auto-translation] On 1 January a vehicle from the Belgian contingent of MINUSMA (United Nations Multidimensional Integrated Stabilisation Mission in Mali) drove over an improvised explosive device (IED). Thanks to the protection of their Dingo II, the soldier occupants remained unharmed. The Ministry of Defense wishes to invest so that all of its vehicles can offer this level of security.

The incident occurred around 11.10 am Belgian time. The vehicles left in a column of eight from Tessit towards the camp in Gao. The affected vehicle led the way. Of the eight soldiers on board, three were slightly injured. After a short stay in the hospital, the three indicated that they wanted to continue their mission in the country.

The vehicle was destroyed but has shown that it can protect its passengers. The Dingos and Piranhas are the only Belgian military vehicles with solid protection against IEDs. “to renew or update other vehicles so that they also provide this level of protection,” says Captain (N) Carl Gillis, Head of Operations Operations at Defense. Unfortunately currently no government budget can be made available for this. “We are wasting time …”, Gillis continued. “The security of our soldiers is an ongoing issue. Zero risk does not exist, but risk must remain manageable. We must increase the chances of survival of our soldiers with the appropriate equipment.”

At present, 85 Belgian soldiers are working for MINUSMA in Mali. 180 similar incidents were reported there in 2019.