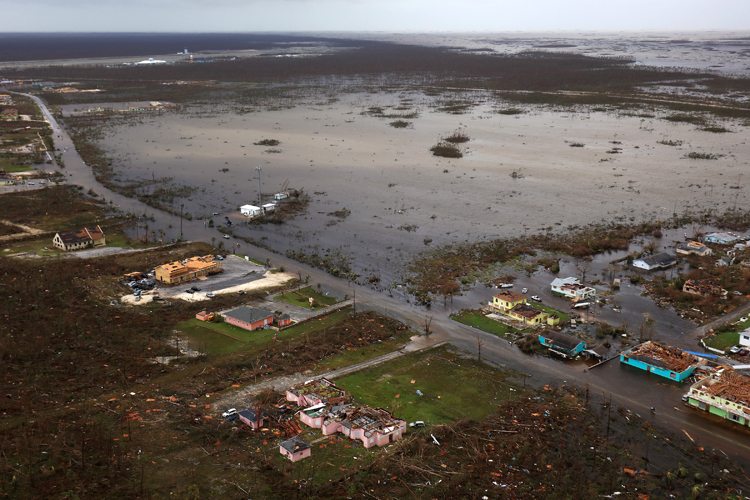 Aerial image of the island Great Abaco, one of the first to get hit by Hurricane DORIAN after she turned Category 5 [Crown Copyright: LPhot Paul Halliwell]

MoD News Release, 04 September 2019: The ship has distributed Department for International Development (DFID) relief items, including vital shelter kits. A rigid-hulled inflatable boat was deployed from RFA Mounts Bay this afternoon (04/09) with a dedicated Humanitarian and Disaster Relief team to join up with the Royal Bahamas Defence Force and unload vital aid to some of those who have been worst hit by the category five storm.

The ship has been in the Caribbean since June in preparation for the hurricane season and was re-tasked last week to sail to The Bahamas in anticipation of Hurricane DORIAN, the strongest ever recorded in The Bahamas.

Defence Secretary Ben Wallace said: “The highly skilled crew and specialist equipment of RFA Mounts Bay have been on call since June to support our overseas territories and friends in the hurricane season.

“Its Wildcat helicopter has begun conducting reconnaissance flights of The Bahamas to help assess the damage and the crew have begun distributing UK aid. My thoughts remain with those affected and our world-class military will continue to assist the Bahamas Government to offer relief and aid to those who need it most.”

International Development Secretary Alok Sharma said: “The images of devastation and destruction across The Bahamas are truly shocking. The clock is now ticking to get help to those in need, and I’m pleased that Mounts Bay has begun to deliver life-saving relief items to those in desperate need.

“Sadly, we know all too well that hurricane season in the Caribbean can wreak this level of catastrophe, which is why we sent a team of DFID humanitarian experts and prepositioned water carriers, hygiene kits and shelter kits on-board.”

RFA Mounts Bay has embarked a dedicated Humanitarian and Disaster Relief team, and is carrying vital aid and specialist equipment, such as all-terrain quads, dump trucks, diggers and stores. It also stores DFID water carriers, hygiene kits including basic items such as soap, and shelter kits. Since Hurricane DORIAN hit, a liaison officer from the Royal Bahamas Defence Force and a DFID humanitarian expert have been onboard to help coordinate the relief efforts. It also has a Wildcat helicopter that has been conducting reconnaissance flights over the islands to assess the damage and provide important intelligence to the Bahamian government and the team of DFID experts who have deployed to the region. DFID’s team is working alongside the Bahamian Government’s National Emergency Management Agency and the Caribbean Disaster Emergency Management Agency, as well as other international partners, to assess the damage caused by the hurricane, and to plan the response.

“I am pleased to be able to use our people and equipment to send water and food ashore to provide aid to the Bahamian people.

“We hope that our presence in the area in the immediate aftermath of Hurricane DORIAN will provide some peace of mind and reassurance to all those affected.”