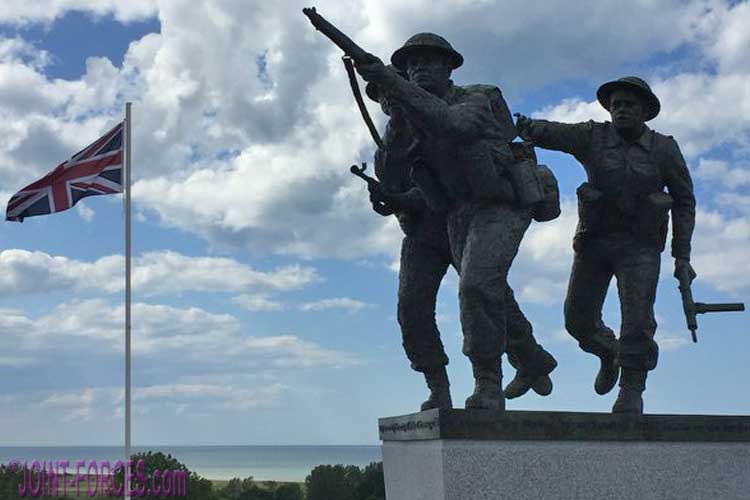 Yesterday, on the 75th Anniversary of the start of the D-Day Landings in Normandy, a sculpture was unveiled by the British Prime Minister and French President.

The D-Day Sculpture by David Williams-Ellis, depicting three British infantrymen storming ashore in 1944, will be a key feature of the British Normandy Memorial but it will only be a small part of the final tribute to the over 22,000 troops under British command who made the ultimate sacrifice in the Normandy Campaign.

From the Normandy Memorial Trust brochure:-

“The Battle of Normandy in 1944 opened the way to the liberation of Europe and the end of the Second World War. British armed forces played a central role in those momentous events, and more than 22,000 made the ultimate sacrifice in the cause of freedom. Up to now there has been no single memorial dedicated to their remembrance. The Normandy Memorial Trust was created in 2016 to realise the dream of Normandy Veterans finally to have a British Normandy Memorial. The Memorial will stand on an imposing site overlooking Gold Beach, one of the principal beaches where British forces landed on 6 June 1944. It will record the names of all those under British command who lost their lives in Normandy between the D-Day landings of 6 June and 31 August 1944 when – with Paris liberated – the Normandy Campaign was officially concluded.

“Also honoured will be the tens of thousands of French citizens who lost their lives as the battle for the freedom of Europe was fought-out in the towns and villages of Normandy. The core memorial has been financed by the British government from the LIBOR fund. But for the British Normandy Memorial fully to take its place alongside the other national memorials in Normandy, the project needs to develop educational and other facilities so that the generations of the future can fully understand the significance of what happened on the beaches and in the fields of Normandy in the summer of 1944, and the part played by the United Kingdom in securing Europe’s future.”

Accompanying images of the D-Day Sculpture at Ver-sur-Mer were taken yesterday by out contributor Robert Shaw, who is accompanying Normandy Veterans at this year’s 75th Anniversary commemorations.