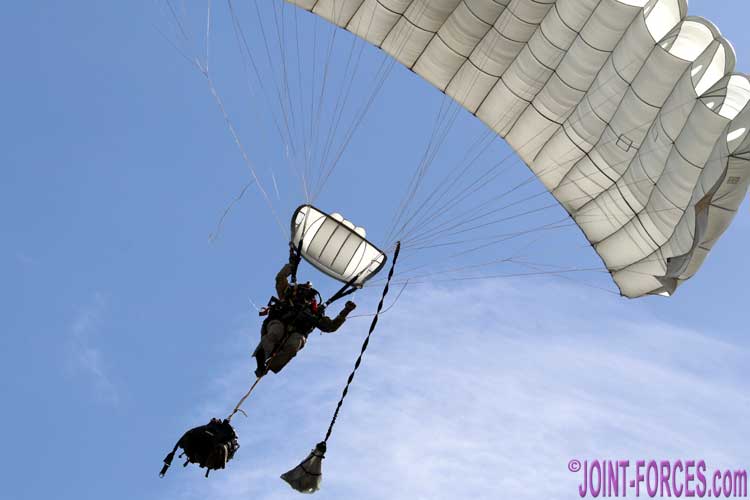 Originally intended to open the SOFINS dynamic display on Tuesday morning, but cancelled under peacetime safety regulations due to very high winds over the SpecOps airfield at Camp de Souge, yesterday afternoon France’s Special Reconnaissance Regiment seized a brief window of opportunity in the bad weather to insert a six-man recce team along with a tandem passenger (representing a clandestine agent being dropped behind enemy lines).

The demo on the second day of France’s biennial Special Operations Force expo was intended to showcase all primary units of the French Army Special Forces Command (COM FST) plus the French Navy’s Commandos Marine (Bérets Vert) and SOF-supporting French Air Force assets. We intend to cover the full displays, using images shot over both days, at a future date.

Several new items of kit and equipment also caught our eye inside the expo hall, including the new HAIX boots selected by France’s GIGN and Police and the ARQUUS TRIGGER pick-up variant of the VT-4 (TRAPPER) light utility vehicle. However articles on these will have to wait for another day as I am shortly heading off to Camp de Souge again to cover the final day of SOFINS 2019.

SOFINS is organised by Cercle de l’Arbalète (Circle of the Crossbow).