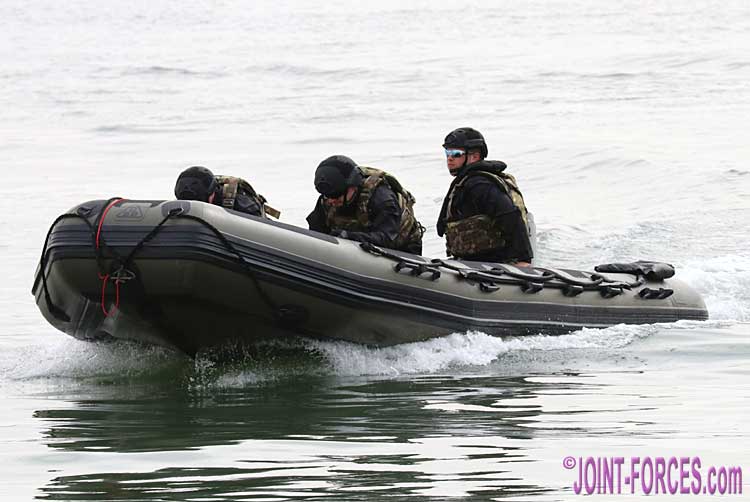 Over the last couple of days we have concentrated on IDEX 2019 but this afternoon we grabbed the chance to visit NAVDEX 2019 to photograph the waterborne display, writes Bob Morrison.

NAVDEX, the Naval Defence Exhibition & Conference, is held literally in parallel with IDEX occupying the quayside alongside the Abu Dhabi National Exhibition Centre with numerous international warships moored next to the navy-themed waterside exhibition halls. I am a firm believer that warships should really only be photographed at sea and from the deck of another warship, unless of course a helicopter flight can be blagged, but small watercraft are a different kettle of fish entirely.

Prior to commencement of today’s waterborne demo I took the opportunity to photograph the aircraft participating in the main dynamic display from a much less cluttered vantage point than the main IDEX grandstand and I plan to return to these in more detail at a later stage. The Saab 2000 Erieye AEWC (Airborne Early Warning & Control) aircraft acted as eyes-in-the-skies for the main display scenario (more later) and no less than three examples of the UH-60 ABH (Armed Black Hawk) provided (blank) suppressive fire during the UAE Land Forces counter-attack.

The waterborne display commenced with a downed pilot recovery by a RIB-borne Special Operations team laid on by UK company SURVITEC Group; all personnel participating were highly experienced former Royal Marines and British Army specialists. Several specialist littoral zone craft then exhibited their speed and manoeuvrability in a series of displays; the fully armoured TRITON 980 from Streit Group of Ras Al Kaimah and the first Persian Gulf manufactured Combat Boat from Al Fattan Ship Industry of Abu Dhabi both caught my eye.

Finally, back at IDEX we photographed the new Mbombe M4 Multi-Role Mine-Protected 4×4 Armoured vehicle from Paramount Group of South Africa which was also unveiled at the expo.