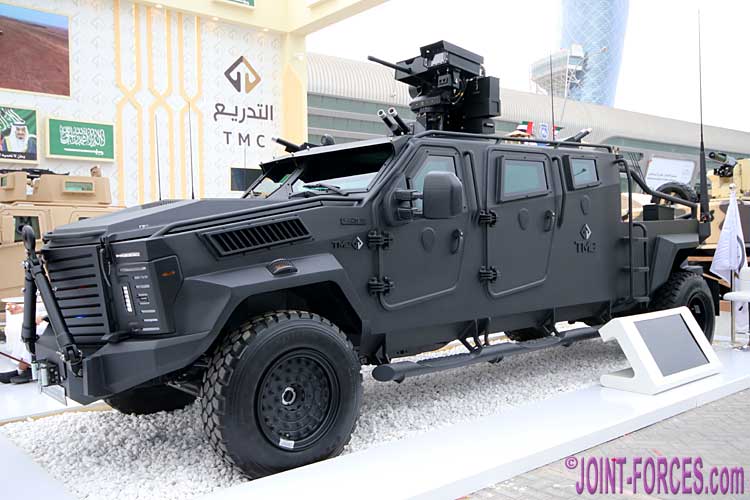 After flying in overnight from London, earlier today we took in much of the IDEX Opening Ceremony before conducting a preliminary recce of the main display halls. Initial impressions are that this will be a very interesting expo and we have already spotted a number of new developments which we will hopefully follow up on after the dust settles.

The first new subject to catch my eye was the STORM-XL armoured patrol vehicle displayed by al Tadrea Manufacturing Company (TMC) of Saudi Arabia. Based on an uprated Ford F-series chassis, this 5146mm wheelbase seven-man 4×4 (a nine-man configuration is also available) is protected to B7 level and has a GVW of 8,800kg. A senior company representative told us this is not a prototype and a quantity of these new vehicles has already been deployed by Saudi Forces.

Revision Military recently bought Protonex Technology Corp to increase their Soldier Power portfolio and we spotted one of their in-service SPM-622 Squad Power Manager devices on display and one of the specialist Protonex sales team gave as briefing of how it works. I cannot profess to be an expert on the power topic, so will need a little time to process the information gleaned, but hope to get back to you with more after the expo.

Finally for today, 5.11 Tactical had some garments from their new GEO7 camouflage range, developed in partnership with Veil Camo, on display at their stand. This is the first time we have been able to view the two new patterns – Terrain 865 and Night 357 – and to ensure we photographed the former in better lighting conditions we asked to take it outside where the light was bright overcast. If all goes to plan we will bring further details in a future Camouflage feature.

Hopefully this should be enough to whet readers’ for today, because darkness has fallen across the Emirates and I am heading out to try some interesting downtown cuisine.