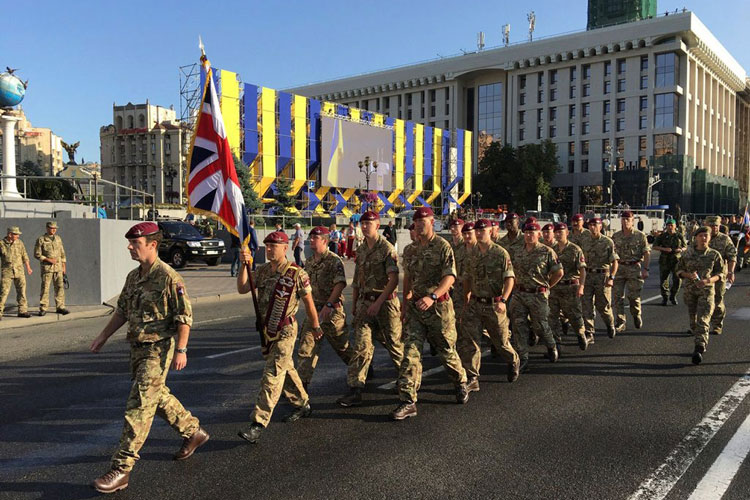 Stress that the aggression towards Ukraine by the Russian Federation is a direct threat to Euro-Atlantic security and a challenge to the existing system of international relations;

Underline that the ongoing breach of ceasefire arrangements by Russian backed formations and other illegal groups leads to daily losses among the Ukrainian military and civil population, and urge Russia and its proxies to commit to full implementation of the Minsk Agreements, beginning with a comprehensive ceasefire and withdrawal of heavy weaponry; Condemn the increased military presence of the Russian Federation around Ukraine’s borders, in the territories of Donetsk and Luhansk regions, and in the illegally seized Autonomous Republic of Crimea, and the Russian Federation’s destabilising actions in the area of the Black Sea and the Sea of Azov; Agree to deepen cooperation in countering Russia’s aggression, malign activity and abuse of the rules-based international system in Ukraine, in the UK and elsewhere.

The Ministry of Defence of the United Kingdom: Stresses complete and unconditional support of Ukraine’s sovereignty, independence and territorial integrity; and Assures continuous support for Ukraine’s Euro-Atlantic aspiration, primarily the process of increasing the capability of the Ukrainian Armed Forces through implementation of Ukraine’s Defence Reform programme as outlined in the Strategic Defence Bulletin

The Ministry of Defence of Ukraine confirm their decisive will to continue reforming the Defence Sector in accordance with the principles and approaches adopted in the North Atlantic Treaty Organisation (NATO).

The Participants have committed to implement the following types of further cooperation: – Maintain continuous dialogue between the Defence Ministries of the two nations; – Improve cooperation in cyber, hybrid defence and defence intelligence; – Increase UK advisory assistance available to Ukraine; and – Augment the military diplomatic representation of the United Kingdom in Ukraine.

The Participants have agreed to increase cooperation along the following priority lines: – Deliver operational level training through increased UK presence under Op ORBITAL – Develop future capabilities of the Ukrainian Armed Forces, in particular in the Maritime and Air domains; – Support the change in quality and content of military education in Ukraine, drawing on advisory assistance from British experts; – increase military-technical cooperation, seeking to establish closer collaboration between the defence industries of the two nations; – Seek to support the development of military infrastructure.

The Minister of Defence of Ukraine and the Secretary of State for Defence of the United Kingdom of Great Britain and Northern Ireland have agreed to continue bilateral dialogue in 2019. The above Joint Statement is not legally binding.