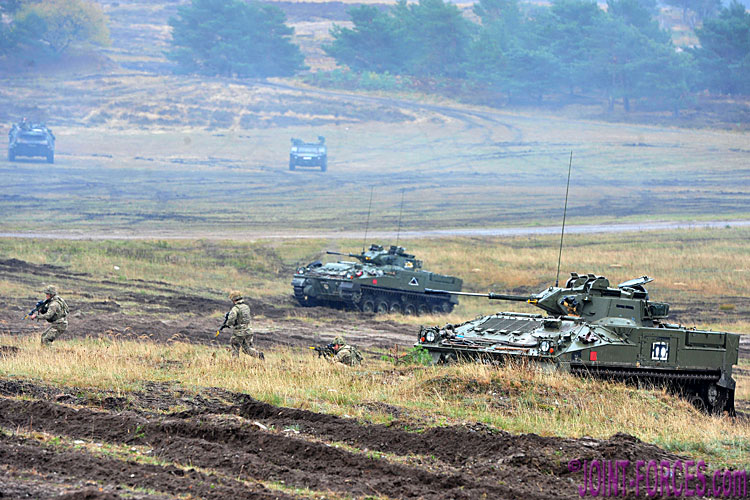 It had originally been intended that the last British combat troops based in Germany would be brought home next year but it will be formally announced later today that Sennelager Training Area will now be retained, probably for at least the next five years. It is understood the Royal Engineer and German Army joint amphibious capability in Minden, Britain’s armoured vehicle storage facility at Mönchengladbach, and the British munitions depot in Germany will also be retained.

In July the British Defence Attaché in Germany, Brigadier Rob Rider, was quoted as saying: “The aim is to now look at Sennelager in co-operation with NATO allies, NATO partners and to look at our deepening relationship with the German Army, and use Sennelager as a multinational / international training area. The British will retain the lead for it, for the foreseeable future, ’til another decision is made not to do that and British troops will fly out to Germany to use the facilities.”

Prior to signing the Joint Vision Statement, which is a bilateral declaration on close cooperation in security and defence policy, the two Ministers will today first watch a floating bridge being built over the River Weser by a joint unit of German and British combat engineers, using M3 Amphibious Rigs used by their two armies. They will then witness a dynamic demonstration by troops of both countries, integrated into a common defence scenario, on the Sennelager Training Area.

Yesterday JOINT-FORCES.com was on the training area to capture the dress rehearsal, which involved elements of Germany’s Panzer Brigade 21 and Britain’s 20 Armoured Brigade working in close cooperation. The German units taking part were mostly drawn from Aufklärungs bataillon 7, Panzer bataillon 203 and Panzergrenadier bataillon 212 and the British component was provided by the Queen’s Royal Hussars and 1st Battalion of the Princess of Wales’s Royal Regiment.

Carl reports: “The theme of the demo was an advance to contact action conducted by a binational force, which started with German reconnaissance elements running into enemy positions. By the commander deploying a Quick Reaction Force the recce element was able to disengaged, making way for a hasty attack conducted by a company of 1 PWRR supported by a platoon (+) of Challenger 2 MBTs from the QRH.”

Background: On Sunday 30th September the UK MoD announced that around 185 British Army personnel and 60 Ministry of Defence civilians will remain in Germany, once the withdrawal of British Army units to the UK has been completed:-

Defence Secretary Gavin Williamson said: “We are increasing our British points of presence across the world. We will not be closing our facilities in Germany, and instead use them to forward base the Army.”

Army personnel will be permanently based in the country where the UK is retaining the 45-square mile Sennelager Training Area, which provides both UK and NATO forces with an expansive live firing training area. It has a long tradition as a home from home for British service personnel. The remaining Army personnel will also support critical NATO infrastructure and assets such as the combined river crossing capability based in Minden. It uses M3 vehicles jointly operated by British and German troops, and both nations are currently in discussions regarding a future bilateral upgrade of the vehicles.

Retaining Sennelager alongside the adjacent Athlone Barracks will provide remaining British personnel with the vital domestic infrastructure, including housing and schooling. Elsewhere the Army is maintaining a presence at the Ayrshire Barracks in Mönchengladbach, where approximately 2,000 vehicles can be stored, and the German Wulfen Defence Munitions Storage Facility, which holds operational ammunition.

UK MoD Press Release, 5th October: In an era of evolving and intensifying threats, the UK remains committed to building ever-closer relationships with our allies, the Defence Secretary reaffirmed today.

Image of the demonstration given by German and British troops in front of the Secretary of State for Defence and his German counterpart [SCrown Copyright: Sgt Jonathan Lee van Zyl]

Defence Secretary Gavin Williamson said: “Although we are preparing to leave the EU, our commitment to European security is resolute.

“The statement signed today strengthens UK-German ties and bolsters the defence of two key NATO partners. This is an alliance we both hold dear.”

The Defence Secretary also attended a demonstration from UK and German personnel who form part of the combined river crossing capability in Minden – a capability vital to NATO operations. The visit comes after the announcement that the British Army will be permanently based in the country beyond 2020.