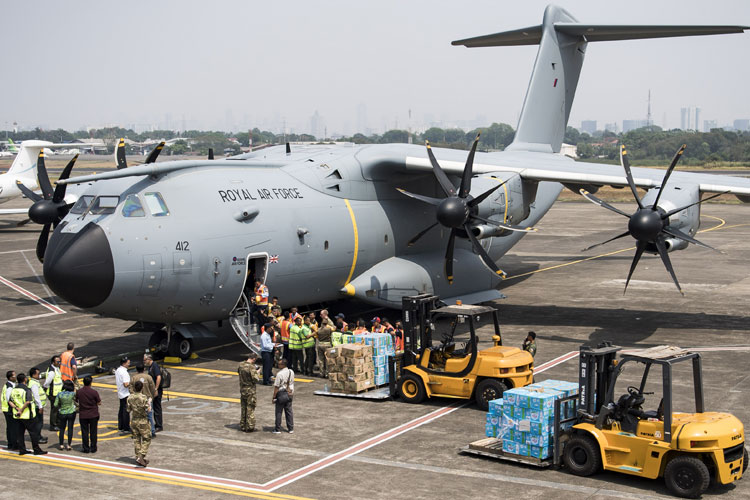 An RAF aircraft has successfully delivered 17.5 tonnes of UK aid supplies for those affected by the devastating earthquake and tsunami that struck Indonesia.

UK MoD News Release, 5th October: The A400M Atlas touched down at the international relief centre at Balikpapan, which is the humanitarian operational hub for the affected region, at 1302 local time (0602BST).

On board [were] 1,280 much-needed shelter kits and 288 hygiene kits, as part of the £3 million pledged by the Department for International Development (DFID) to the relief effort. The aircraft was also carrying 3 tonnes of Indonesian supplies, in addition to the 17.5 tonnes of UK aid. A DFID aid flight also departed for Balikpapan, Indonesia, from the UK last night [Thursday] carrying vital supplies to support the earthquake and tsunami relief efforts.

The UK aid package includes much-needed air cargo handling equipment. This includes a forklift truck and conveyor belt that will rapidly increase the rate that humanitarian aid can be transferred off flights and distributed to affected communities. Other equipment includes transport trucks and a lighting tower generator. This will speed up the delivery of aid to those that need it most by facilitating a greater turnaround of aid-carrying flights at Balikpapan Airport.

The UK has responded to information from the Indonesian government about the needs of the residents. There is a DFID team of humanitarian experts in Indonesia coordinating the response.

In addition, the UK Government has also announced it will match pound-for-pound the first £2 million raised by the generous British public to the Indonesia Tsunami Appeal launched yesterday by the Disasters Emergency Committee.