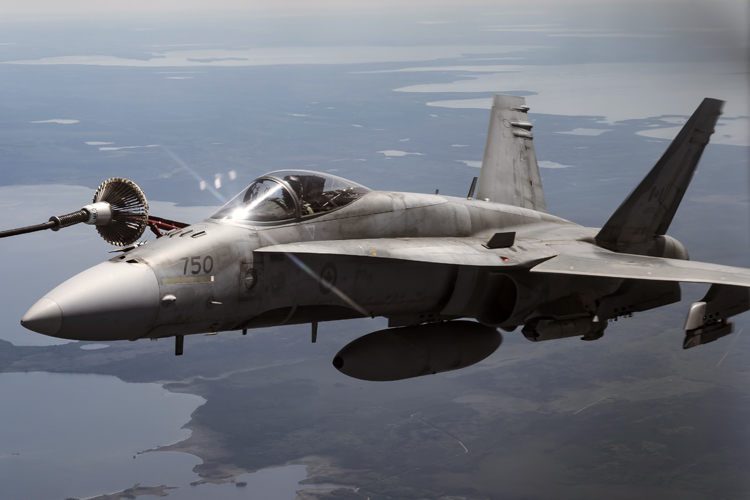 DND News Release, 16 August 2018: This mission is part of Operation REASSURANCE, Canada’s contribution to NATO assurance and deterrence measures in Central and Eastern Europe. During this deployment, the CF-18 Hornets will augment the Romanian Air Force’s air policing capabilities.

NATO enhanced Air Policing has been part of its assurance and deterrence measures since 2014. These measures demonstrate the collective resolve of Allies, the defensive nature of NATO, and help deter the threat of potential aggression against NATO Allies.

Defence Minister Harjit S. Sajjan stated: “Through our Defence Policy we pledged to keep Canada engaged in the world. Our support to air policing in Romania is an important contribution and strong demonstration of our ongoing support to NATO, one of our most important multilateral relationships.”

Major-General Bill Seymour, Deputy-Commander, Canadian Joint Operations Command, said: “Collective defence is at the very heart of NATO’s founding treaty. The Canadian Armed Forces remain as committed to that principle now as we were almost 70 years ago. Our air women and men will work cooperatively with our allies to ensure the integrity of their airspace. As a strong supporter of NATO, we are proud to contribute our capabilities to NATO’s enhanced Air Policing in Romania.”

Brigadier-General Iain Huddleston, Deputy-Commander Force Generation, 1 Canadian Air Division, added: “The members of the Royal Canadian Air Force deploying in support of NATO enhanced Air Policing in Romania are ready to contribute to this vital collective defence mission. Canadians can be proud of this contribution, as we build on the already strong relationship we have fostered with our Romanian and regional allies over the past several years.”

Lieutenant-Colonel Timothy Woods, Commander, Air Task Force Romania, is quoted as saying: “Our highly-trained airmen and airwomen are committed to support NATO in safeguarding Allied airspace. Preserving the integrity of NATO airspace is a collective task, and we are dedicated to contribute in keeping the Romanian skies safe and secure. Our mission is to preserve peace and prevent conflict in the region” A CF-18 Hornet fighter jet taxis in Campia Turzii, Romania, getting ready to take-off for a local familiarisation flight of the region, during NATO reassurance measures on May 12, 2014 [DND photo: MCpl Patrick Blanchard]