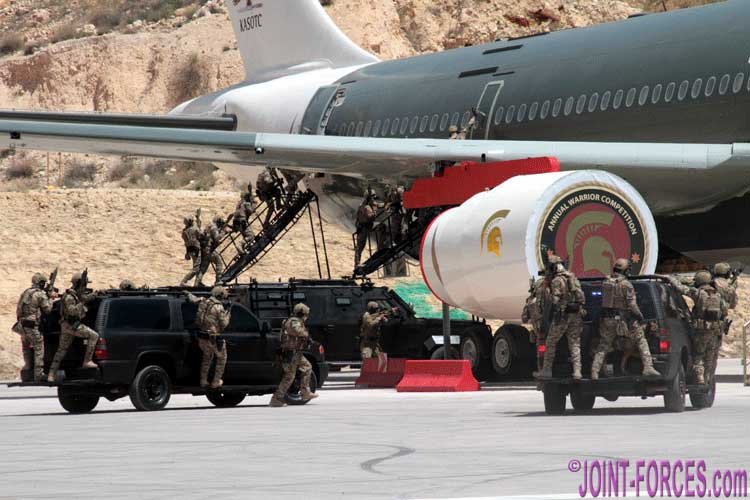 The 10th Annual Warrior Competition was opened this morning with a series of explosive demos by Jordan’s Army and Police Special Operations units.

Run at KASOTC, the King Abdullah II Special Operations Training Center, the five days of competitive events will see 40 teams from 24 countries going head to head against their peers.

This afternoon, following the Opening Ceremony and SpecOps demos, one member picked by each team participated in the Top Gun event.

Basically a warm-up prior to the first competitive team event tomorrow, Top Gun pits shooters against each other in pairs with the best in each heat progressing to the next heat to do it all again, and again, etc until just one operator is left standing.

Assault rifle, shotgun and pistol have to be used on four different stations on the 25-metre ranges with multiple targets having to be engaged in strict rotation.

This event, which does not count towards teams’ final points tally after the four full days, requires both speed and accuracy plus a shedload of stamina for those shooters who make it through to the last heats.

Over the next few days my priority will be covering the non-stop action rather than updating the website, but we will run full coverage of what looks to be an epic competition after I get back to my office and I will try to bring you brief web updates most evenings.