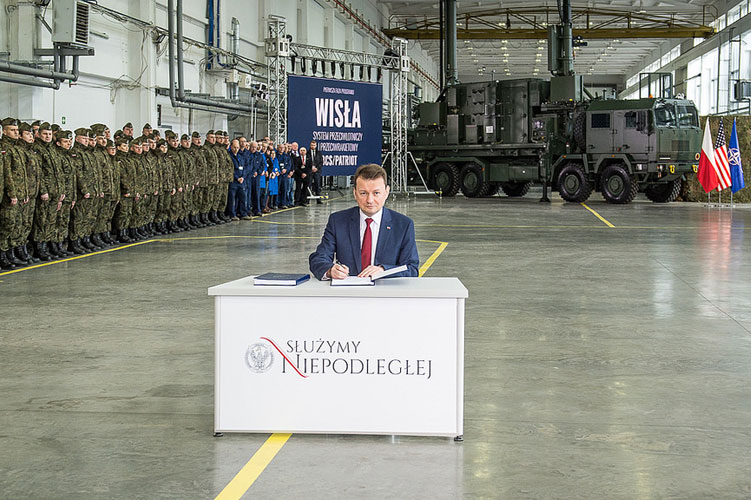 The Polish Ministry of National Defence has signed a contract to procure an Air Defence system based on the IBCS/Patriot guided missile, Transporter Erector Launchers, Integrated Battle Command System and AN/MPQ-65 radar systems.

Press Release: “On the Vistula River it is safe thanks to the fact that today [28th March] we are signing a contract that will bring a modern system to Poland. We join the elite group of countries with effective defence, possessing weapons that ensures security,” said Mariusz Błaszczak, the Minister of National Defence during the signing of the contract for the first stage of the ‘WISŁA’ [Vistula] programme.

The ‘WISŁA’ system will be one of the main components of the country’s Air Defence system. Minister Mariusz Błaszczak signed a contract for anti-aircraft and anti-missile medium-range missile system ‘WISŁA – 1 Phase’ on Wednesday, 28 March 2018 in Warsaw in the PIT-RADWAR S.A. The ceremony was attended by Andrzej Duda, the President of the Republic of Poland and superior of the Armed Forces and by Mateusz Morawiecki, Prime Minister and also by Paul W. Jones, US ambassador to Poland.

The first phase of the programme concerns the acquisition of two PATRIOT batteries in the 3+ configuration with the IBCS system. “It is indeed a very important event in the history of our country, it is the highest arms contract in our history. It is a contract thanks to which modern technologies will also come to Poland, based on the negotiated offset, but also on the basis of the Polonisation of the elements of this system. Polish companies will produce launchers, will produce transport vehicles, they will also produce communication systems” Minister Mariusz Błaszczak emphasised the role of the offset and the participation of the Polish defence industry in the implementation of the contract.

“This unusual, historic moment is the introduction of the Polish army and the Republic of Poland into a whole new world of state-of-the-art technology, modern weaponry and defence measures,” argued President Andrzej Duda. “This is the most modern weapon, which will also be partly manufactured here in Poland and will be integrated with American systems. We will be much safer thanks to this,” Prime Minister Mateusz Morawiecki emphasised.

The head of the Ministry of Defence announced the value of the ‘WISŁA’ system – Stage I contract. Poland will pay $4,750 million dollars for the PATRIOT system together with the battlefield management system. “It’s a good price. We will proceed immediately to the second phase of negotiations,” the Minister said. The contract for the elements of the ‘WISŁA’ system is a huge achievement of Polish negotiators. The initial price we have been offered is $10.5 billion.

According to the head of the Ministry of Defence, the contract for the elements of the first stage of the ‘WISŁA’ system is the enormous achievement of Polish negotiators. The negotiated terms of the agreement, including its value, are the result of several months of negotiations conducted by representatives of the Ministry of National Defence In the course of them, a detailed analysis of the presented solutions was made and the most favourable from the operational and economic point of view were selected. In addition, among others, the decision was taken to change (in the first phase) configuration for the typical for US Army in the IBCS area and to obtain only key elements of the system through the FMS programme and that the remaining elements will be purchased as part of national procedures from the Polish defence industry. Lowering the value of the contract does not affect the combat readiness of the acquired system.

The Minister of National Defence Mariusz Błaszczak stressed that Poland will be the second country in the world after the United States with the most modern Patriot sets with the IBCS system: “This system was bought for the Polish Army due to the fact that in Poland the North Atlantic Treaty armies, also the US military, are stationed, so this system will ensure security and ensure the integration of the Polish Army with the United States Army. It is also a very important achievement,” he stressed. Also US ambassador to Poland Paul W. Jones emphasised the positive effects of the acquisition of the IBCS / Patriot system by Poland. “The contract for the purchase of the Patriot system means that Poland will be safer, NATO will be stronger and our military cooperation closer than ever; we are allies forever,” he said.

The basic task of the ‘WISŁA’ system will be to defend against tactical short-range ballistic missiles (including manoeuvring), cruise missiles and manned aircraft in the whole range of speed and flight heights used by tactical aviation as well as combating unmanned aerial vehicles. The delivery of both batteries of the IBCS / PATRIOT system is planned by the end of 2022, and the initial operational capability (IOC) is planned at the turn of 2023 and 2024.

The second phase of the programme includes acquiring the remaining six PATRIOT batteries with IBCS, along with the AESA omni-directional radar and SkyCeptor low-cost missiles. In addition, it is planned to obtain in the Polish defence industry the early detection P-18PL radars and PET/PCL passive radars.

The IBCS / PATRIOT system, delivered to Poland as part of the ‘WISŁA’ programme, will make our country very resistant to air attacks. The system will monitor the airspace 24 hours a day, it will recognise the threat itself, e.g. a missile or enemy plane, and it will be able to neutralise it within a dozen or so seconds. The system will allow the Polish Armed Forces to achieve operational capability to provide shields for important facilities, administrative and economic centres, troops during combined defence operations, in a national and allied system.  <ends>