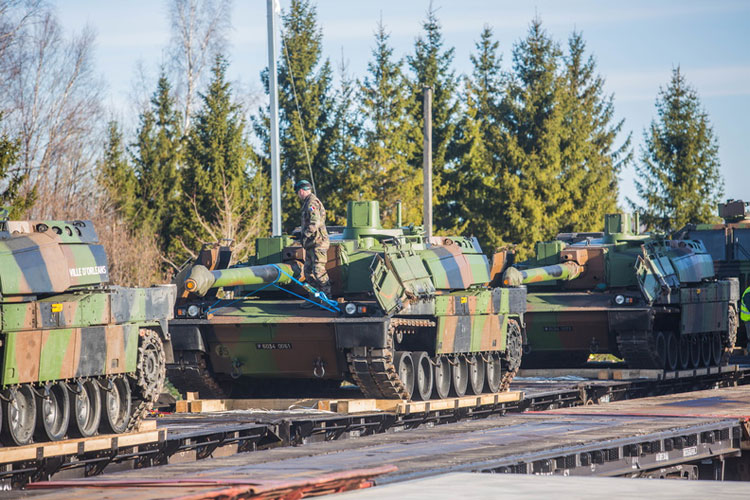 The official communiqué states: “France is contributing 300 servicemen and various types of combat equipment to the NATO combat group being stationed in Estonia. In addition to the tanks, the French servicemen are equipped with VBCI infantry combat vehicles and VAB armoured vehicles.

The Leclercs will give the British commander an additional tank group to supplement his Challenger 2 MBTs [Estonian MoD: Rms Roomet Ild]

“At present there are 50 French servicemen in Estonia, the remainder will arrive in the first half of April. The French will be serving at Tapa for the next eight months, after which they will hand over responsibility to the Danes.

“The Estonian Defence Forces have prior experience working with the French in the operation in the Central African Republic as well as the anti-piracy Operation ATALANTA.

“The combat group is comprised of nearly 1200 Allied soldiers. The United Kingdom is contributing more than 800 servicemen, along with Challenger 2 tanks, Warrior infantry fighting vehicles, as well as AS90 self-propelled guns, and armoured vehicles.”

At the Warsaw Summit in June 2016, the leaders of NATO’s 28 member countries decided, as a result of the changed security situation, to station Alliance battlegroups in Estonia, Latvia, Lithuania and Poland. The United Kingdom is the lead country for Battle Group Estonia, or BG EST, stationed at Tapa in Estonia, with France and Denmark also contributing; France undertook the first roulement last spring and Denmark took over from them last autumn for the second.
Share