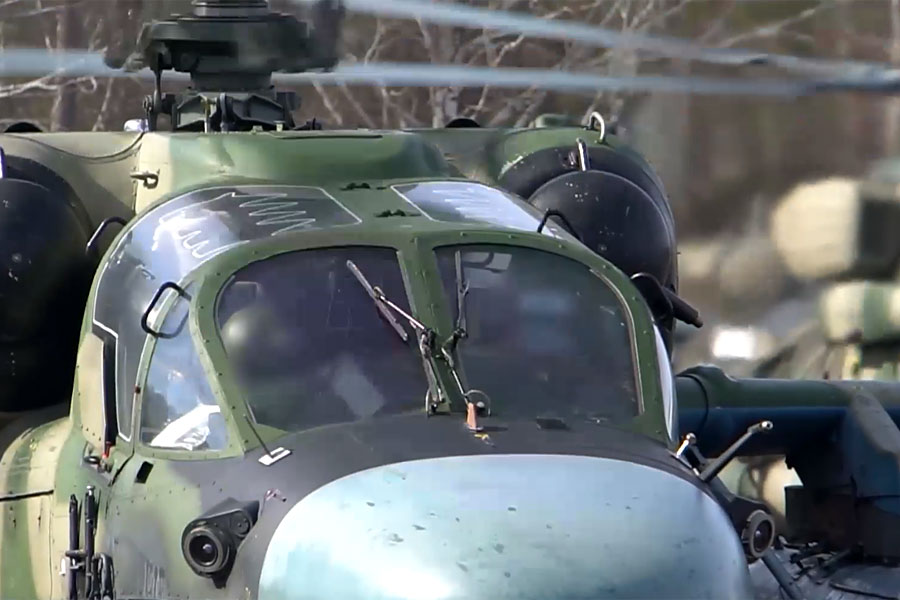 Over the last couple of days the Russian MoD English language news site has made videos available of helicopter attacks on Hostomel Airport.

The crews of a rotorcraft attack group have conducted a tactical landing operation at one of the Ukrainian military airfields. The group of Ka-52 and Mi-24 attack helicopters has destroyed the firing positions of the man-portable air defence system (MANPAD) operators, air defence missile systems and armoured vehicles of the Ukrainian Armed Forces around the perimeter of the airfields.

The attack was being conducted by missile and fire armament mounted on the helicopters in various manoeuvres that facilitated the safe tactical landing at the airfield. The army aviation crews had promptly detected the camouflaged air defence systems and MANPAD positions hidden behind civilian vehicles. The pilots of the Russian Aerospace Forces have completely destroyed the air defence system of the airfield by using organic air ordnance.

The commander of the leading Ka-52 helicopter attacked by an intensive MANPAD fire has covered the group of Mi-8 helicopters by drawing the shelling to his vehicle. The leading helicopter has been shelled 18 times by MANPAD and air defence systems from the ground. After being damaged, the crew carried out a precautionary landing and organised a perimeter defence holding it until the arrival of the second rotorcraft attack group despite the continuous attack held by the units of the Ukrainian Armed Forces. The crew of the damaged helicopter did not get hurt and was evacuated to the main airfield of the second rotorcraft attack group.

Thanks to the courage and heroism of the main attack group formed by Ka-52 and Mi-24 helicopters, the landing operation of the Airborne Troops units has been conducted without loss.

¤ There is no indication when these two video sequences were filmed.

¤ Although not named, the airfield in the videos is clearly identifiable as the Antonov-owned international cargo airport at Hostomel, around 25km northwest of the centre of Kiev / Kyiv.

¤ It is well recorded that Hostomel Airfield was first attacked by Russian troops on 24th February at the start of their invasion of Ukraine (which Russia still insists is neither a war nor an invasion but merely a “special military operation”).

¤ Although we have received daily update bulletin emails from the official website of the President of Russia every night around 01:15 GMT, since shortly after the invasion commenced until today we have been unable to open the links to read them or to view the official Russian MoD news pages despite attempting to access from France, Germany and Saudi Arabia as well as from the UK over the last three weeks.