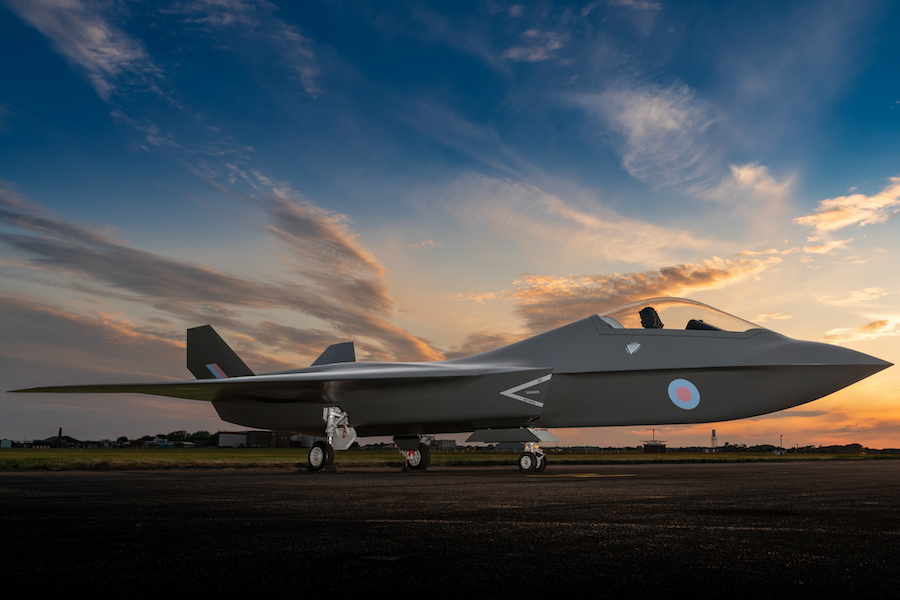 The UK’s ‘next-generation’ Tempest combat air demonstrator is ‘set to fly’ ~ Britain is to lead the development of a new flying demonstrator.

BAE Systems Press Release, Farnborough, 18 July 2022 [embargoed until 15:15]: The UK Secretary of State for Defence, Ben Wallace MP has confirmed plans for Britain to lead the development of a new flying combat air demonstrator, which will play a critical role in proving the technology and design principles needed to deliver the UK’s Future Combat Air System.

Work is being led by UK sovereign combat air industry leader BAE Systems, working with the Ministry of Defence and a number of suppliers across the UK. This pioneering project will deliver the first flying combat air demonstrator in a generation – designed and developed in the UK. The demonstrator aircraft will fly within the next five years.

The flagship project is part of a suite of novel technologies being developed by Team Tempest. These concepts are designed to demonstrate and test the next generation combat air skills, tools, processes and techniques needed to ensure Tempest, the UK’s Future Combat Air System, achieves in service in 2035.

Team Tempest comprises the expertise of the Ministry of Defence and UK combat air leaders BAE Systems, Leonardo UK, Rolls-Royce and MBDA UK. Launched in 2018, alongside the UK’s Combat Air Strategy, Tempest will play a crucial role in providing long-term defence and security for the UK, while delivering significant economic benefits to the nation, securing high-value skills and careers and contributing to prosperity in many UK regions.

Engineers at BAE Systems across the North of England are leading the design, test, evaluation and build process, bringing together new and novel digital engineering technologies such as synthetic modelling and model-based systems engineering. These innovative design and engineering methods are helping to demonstrate how they will significantly reduce the time it takes to design, deliver and upgrade complex combat aircraft.

Defence Secretary, Ben Wallace, said: “I am delighted that the UK, alongside Italy and Japan are working on similar combat air journeys together. Our work with Japan and Italy on cutting-edge technology like this shows the benefit of our alliances across the world.

“The design and development of the demonstrator aircraft represents an important milestone, showcasing the success and talent of our engineers, programmers and software developers. This programme will go on to attract opportunities for many more great minds and talent from across the UK.”

Charles Woodburn, BAE Systems Chief Executive, said: “We recognise our responsibility in providing trusted sovereign combat air capability. We’re partnering with the UK’s highly motivated and skilled supply chain to accelerate the innovation of the nation’s future air power; integrating new technologies so the Royal Air Force and its allies can stay ahead of our adversaries.

“The demonstrator is an exciting once-in-a-generation opportunity providing experienced and young engineers alike a chance to contribute to an endeavour which really matters to our national defence and security.”

The demonstrator will provide evidence for the critical technologies, methods and tools, which will be used on the core platform. As part of the broader activity involved in developing Tempest, the demonstrator programme is also helping retain, further develop and stimulate the next generation of skills and expertise required to deliver this ambitious programme.

Tempest was launched in 2018, in response to the UK’s Combat Air Strategy, which set out an ambitious vision for the future. It outlined the importance of the UK’s sovereign combat air sector in ensuring that the UK retains choice in how it meets its defence and security capability needs and initiated the programme to deliver the successor capability to Typhoon.

The strategy also recognised the broad benefits the sector delivers to the nation and committed to ensure that future procurement decisions take into account military capability, international influence and economic benefit, along with the overall cost to deliver maximum benefit for the UK.

UK MoD Press Release, Whitehall, 15:15, 18 July 2022: A new flying demonstrator will be unveiled within the next five years as part of the UK’s major next generation fighter aircraft programme, the Future Combat Air System (FCAS). It comes as the future combat air programme launches a new recruitment and skills initiative known as Generation Tempest, set to create thousands of new job opportunities across the United Kingdom.

The demonstrator aircraft is already in development between the Government and Team Tempest industry partners and the UK is actively progressing collaboration opportunities on the project with Italian industry partners. The flying demonstrator will be a piloted supersonic aircraft testing a range of new technologies including integration of stealth compatible features. This is the first time the UK will have developed a new fast aircraft using 21st century technology.

Work is rapidly gathering pace on this important part of the FCAS programme, with development of the demonstrator underway at BAE Systems’ facility near Preston in the north of England. This is being supported by hundreds of companies and thousands of engineers across the UK. The demonstrator is vital for ensuring our technology, skills and industrial capability are ready for the future. Designing and building the flying demonstrator will prove integration and test skills. It will also provide invaluable data and lessons to UK industry to support the introduction of a new FCAS aircraft from 2035.

Separately, the UK is now conducting joint concept analysis with close partners Japan and Italy to understand areas of shared interest and to explore potential Future Combat Air partnership options and continues to explore wider partnerships. Further decisions are expected to be made by the end of 2022. Like the UK, both Japan and Italy operate F-35 fighter jets and the nations have undertaken joint exercises together in the past.

Defence Secretary Ben Wallace said: “I am delighted that the UK, alongside Italy, Japan and Sweden are working on the same combat air journey together.

“Our work with Japan and Italy on cutting-edge technologies like this, shows the benefit of our alliances across the world.

“The design and development of the demonstrator aircraft represents an important milestone, showcasing the success and talent of our engineers, programmers and software developers. This programme will go on to attract opportunities for many more great minds and talent from across the UK.”

To support the programme, a series of measures to attract the brightest minds onto FCAS have been announced, including plans for a new Tempest Academy, joint recruitment and talent development between partners, and the launch of a new careers website. It is hoped that this initiative will create a ‘Generation Tempest’ who will bring their own unique ideas and experiences to the programme.

The FCAS programme plays an important role in supporting the Government’s levelling up ambitions, employing around 2,500 highly skilled people across the UK including at combat air sector industrial hubs in Scotland, the north-west and south-west of England. The programme now employs 1,000 apprentices and graduates, offering attractive employment opportunities in STEM subjects such as industrial digitisation, artificial intelligence and data analytics.

UK Director Future Combat Air Richard Berthon said: “FCAS is an exciting, dynamic and inclusive programme, needing a diversity of people, ideas and skills working together. We are recruiting fresh talent who will lead FCAS, delivering one of the world’s most important Defence programmes.”

The FCAS programme is driving developments at the cutting edge of technology and there have been a series of advances across UK industry supporting the programme, some of which are being showcased at Farnborough Airshow this week including: