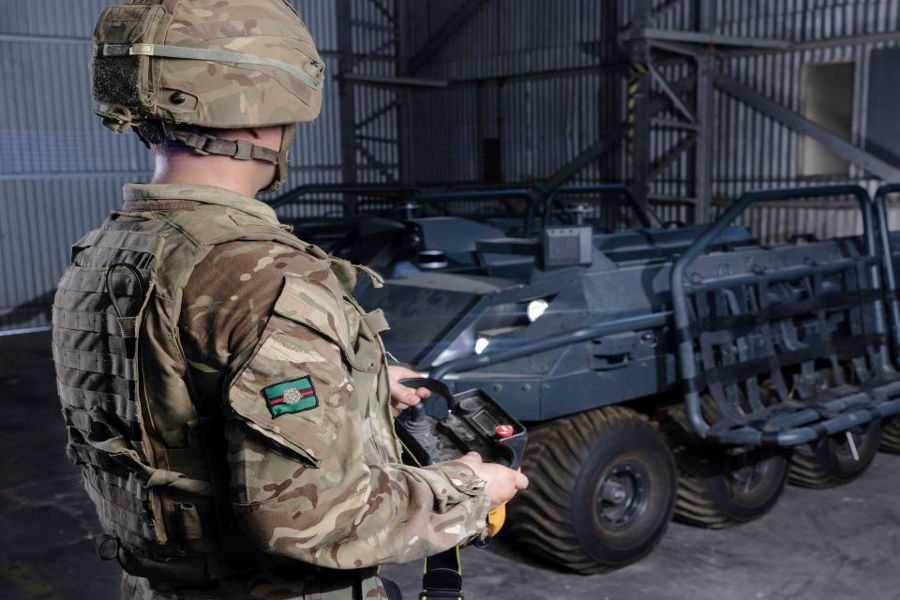 The British Army will integrate Robotics and Autonomous Systems as well as electric vehicles on the battlefield as part of its future vision.

News Release, Whitehall, 15 September 2021: Designed to equip soldiers with a fighting and competitive edge in modern warfare, the integration of Robotics and Autonomous Systems (RAS) will exploit ‘human-machine-teams’ through a combination of autonomous, robotic and artificial intelligence technologies.

Examples of how the Army may deploy RAS in the future include using uncrewed, computer-driven vehicles to provide situational awareness or deliver aid to remote regions. They will also be able to rapidly deploy counter-drone capabilities to survey areas of land and use a wide range of sensors and effectors that can see, shift or shoot across the whole battlefield.

Chief of the General Staff, Sir Mark Carleton-Smith said: “The future British Army will draw on innovation, cutting-edge technology and play its part in Defence’s ambition to become more sustainable and environmentally friendly.

“Our Future Soldier initiative will see more versatile and increasingly deployable land forces in the face of evolving threats.”

As part of its Future Soldier initiative, the British Army will also shortly publish the ‘Approach to Electrification’. Spanning the next 15 years, the strategy is focussed on an increase in the use of batteries, sustainable energy and hybrid electric drive technologies across the Army’s vehicle fleet. Electrification of the battlefield will increase operational advantage and change the way land forces operate in the future, enabling significant advances in stealth mode capabilities with reduced thermal and noise signature. Outlined in the recent Defence Command Paper, innovation will be at the forefront of a future Army. This is further supported by the £24 billion increase in spending over four years, as announced by the Prime Minister last November.

Assistant Head of Plans for Ground Manoeuvre Capability, Colonel Simon Ridgway OBE said: “This approach to electrification will set out how the Army intends to take advantage of the opportunities provided by sustainable technology for land capabilities.

“It will ensure the Army’s electrical infrastructure is ready to meet the electrical demand required on the battlefield of the future. Delivering effect needs the right power, in the right place, at the right time and using hybrid vehicles will make it easier to get the power to where it needs to be.”

The Army has already invested £10 million fitting hybrid electric drives to Man SV, Jackal and Foxhound vehicles with their performance currently being evaluated. Trials of pre-production models are due to take place, including assessments on how to fully recharge electric uncrewed, autonomous systems. The hybrid vehicles are due to be rolled out to the Field Army for use in training and on operations.