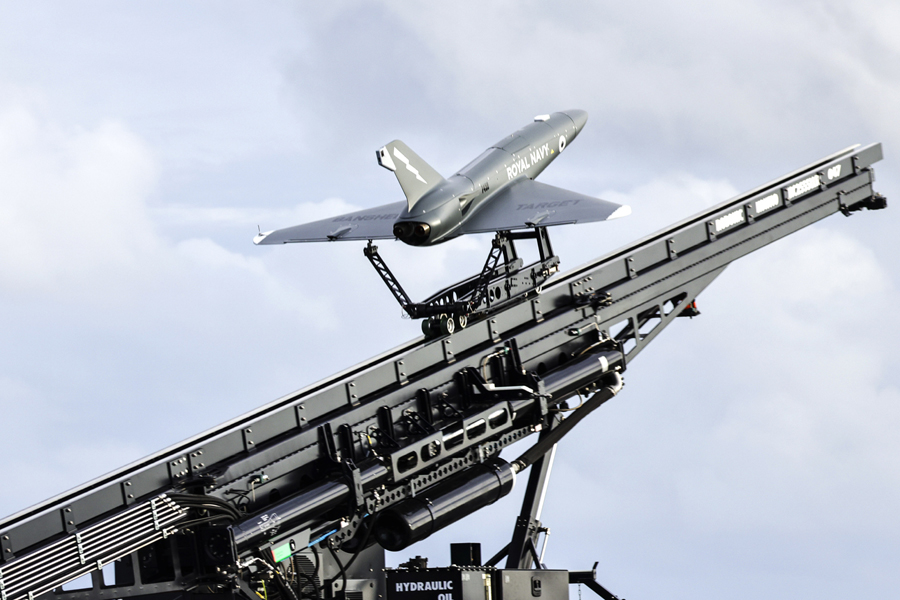 Drones have been launched from HMS Prince of Wales during a landmark demonstration as the Royal Navy explores use of crew-less technology on carriers.

Royal Navy News Release, 29 September 2021: HMS Prince of Wales has launched drones from her flight deck as the Royal Navy begins exploring the use of crew-less technology on the Queen Elizabeth-class aircraft carriers.

Fixed-wing drones – called the QinetiQ BANSHEE Jet 80+ – flew from the carrier’s vast flight deck to assess how they might be used to train personnel in defending against ever-more-capable fast jets and missiles. The jet-powered BANSHEE, which looks like a mini fighter aircraft, can soar to 25,000ft, skim just above the waves, and flies at speeds up to 400 knots (around 460mph). It is hard to detect on radar, giving it all the likeness of an incoming missile – making it a realistic adversary for sailors to train in countering aerial threats.

These drones could eventually be carried by Royal Navy warships and provide operational training to task groups wherever they might be in the world, allowing them to conduct air defence exercises on demand to test reactions and hone responses. And the BANSHEE’s carrying capacity means the Royal Navy can use it for testing future sensors, weaponry and radio equipment. HMS Prince of Wales is the first Royal Navy ship to carry these drones for demonstration purposes, as she moves towards being fully operational.

The BANSHEE flights represent the first step for the Royal Navy in exploring how crew-less tech could be operated from the Queen Elizabeth-class aircraft carriers in the future. “There is a real need for a low-cost drone such as the BANSHEE that can replicate a range of the threats in the skies and provide a test bed for future payloads,” said Commander Rob Taylor, lead for Royal Navy Air Test and Evaluation.

“The key to this is that a warship can carry this drone with it on operations, launch it and use it to keep personnel razor-sharp in countering threats from above.

“The ability to adapt the payload for differing tasks is also crucial to provide value for money and interoperability across the fleet.”

The demonstration with HMS Prince of Wales looked at how the drone and associated support equipment, including launcher, can be integrated within a busy ship and flight deck. It also looked at installing sub-systems on board and procedures for moving and setting up the drone and kit on the flight deck, which has been a hive of activity as the ship trains with F-35B Lightning jets and participates in the largest military exercise in the UK, JOINT WARRIOR, off the Scottish coast.

Flight Test Engineers and operators from QinetiQ, which owns and operates the BANSHEE, flew three of the air vehicles from the drone’s launcher on the Hebrides range off the northwest coast of Scotland. The BANSHEE launched from the ship and recovered to land via parachute.

The demonstration is showcasing just one of the options as part of Royal Navy Develop Directorate’s Project VAMPIRE, which is looking at lightweight, fixed-wing carrier-borne crew-less autonomous systems. The project forms part of a series of demonstrations that will help define Royal Navy aviation of the future through the Future Maritime Aviation Force, which looks at how the Fleet Air Arm will operate in the years to come.

“It aims to capitalise on the best that industry has to offer working alongside established aviation systems already used across the globe,” added Cdr Taylor.

“The programme will look at rotary wing and fixed wing drones to fulfil a number of tasks to increase mass on the carriers and allow crewed aircraft to maximise their capacity.

“The BANSHEE demonstration is just the start of the un-crewed autonomous systems programme of work for the Royal Navy.

“This is an extremely exciting time for maritime aviation and the future of the Fleet Air Arm.”