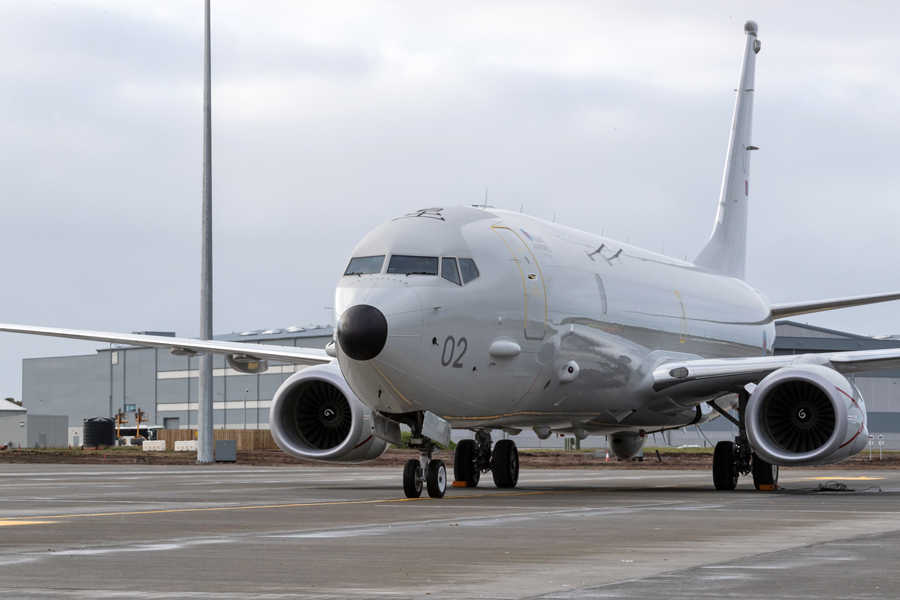 A maintenance support contract for the RAF’s Poseidon Maritime Aircraft fleet has been signed with Boeing Defence UK (BDUK).

Press Release, Whitehall, 08 July 2021: A contract worth over £230 million for the RAF’s Poseidon Maritime Aircraft fleet has been signed with Boeing Defence UK (BDUK) creating more than 150 UK jobs.

The majority of the 153 BDUK jobs will be based at RAF Lossiemouth – the home of the Poseidon fleet – and will provide aircraft maintenance support and personnel alongside a comprehensive training package for aircraft crews. The remaining 46 jobs will be spread across sites at Bristol, Yeovil and Gosport.

Specialising in anti-submarine warfare, the Poseidon (P-8A) is the RAF’s multi-role maritime patrol aircraft. Working alongside the Royal Navy and close maritime allies such as the United States and Norway, Poseidon locates, identifies and tracks potentially hostile submarines operating around UK waters.

Defence Secretary Ben Wallace said: “Our new Poseidon fleet continues to grow from strength to strength and is already defending the UK’s maritime interests at home and abroad.

Scottish Secretary Alister Jack said: “This contract award and the creation of more than 100 jobs at RAF Lossiemouth is another great example of the benefits UK defence investment brings to Scotland.

“The Moray station’s fleet of Poseidon submarine hunting aircraft are vital to maintaining the security of the UK and our NATO allies. And the prosperity generated by defence employment in Scotland, alongside the UK Government’s Plan for Jobs, will help us build back better from the pandemic.”

This latest contract builds on the £470 million investment that the Poseidon programme has already driven to RAF Lossiemouth and the local area, creating and sustaining jobs and boosting the local economy. The Poseidon fleet is operated from a new £100 million facility at RAF Lossiemouth, opened in September 2020. Over 300 jobs were supported during the facility’s construction. The facility has a three-bay hangar, accommodation for squadrons, training, mission support and two state-of-the art flight simulators. RAF Lossiemouth has also undergone a £75 million upgrade to the runway and other operating surfaces. It will be the future home of the UK’s fleet of Wedgetail Airborne Early Warning surveillance aircraft, Scotland’s crucial role in UK and NATO defence and security.

DE&S P-8A Poseidon team leader, Malcolm French said: “I am extremely proud of the P-8A delivery team and what is yet another example of great delivery by DE&S. Placed to a tight timescale, and encompassing exacting requirements, this contract helps enable the full range of capability that Poseidon brings to be realised, sees our modern aircraft fully supported, and our personnel being trained from state-of-the-art facilities.”

Nine Poseidon, based on the Boeing 737-800, have already been ordered from Boeing by the UK. Five aircraft named the ‘Pride of Moray’, ‘City of Elgin’, ‘Terence Bulloch’, ‘Spirit of Reykjavik’ and ‘Fulmar’ are all now operating out of Lossiemouth, with four more to come later this year.

Boeing Press Release, Lossiemouth, 08 July 2021: Boeing and the UK Ministry of Defence have signed an agreement for Boeing to support the Royal Air Force’s (RAF) fleet of Poseidon MRA1 maritime patrol aircraft and train the crews that operate them.

“Our new Poseidon fleet continues to grow from strength to strength and is already defending the UK’s maritime interests at home and abroad,” said Defence Secretary Ben Wallace. “This contract with Boeing Defence UK secures our critical submarine-hunting aircraft capabilities whilst also creating a home-grown training enterprise and creating over 150 British jobs.”

Under the aircraft and training support contract, valued at $321.6 million (£233.5 million), Boeing will provide maintenance services, spares and repairs, including tools and ground support equipment, as well as supply chain management, forecasting and inventory management, and airworthiness services for the RAF’s P-8 fleet.

The training element of the contract will offer a suite of training systems and courseware to prepare aircrew and maintainers to safely and effectively operate and maintain the fleet. Boeing will provide the flight instructors to train P-8A pilots, and under the terms of a subcontract, Burgess Hill-based CAE UK will create more jobs in the UK to provide rear crew and engineering instructors, and console operators and controllers who will perform role playing and support functions during training and mission rehearsal exercises.

These agreements will create 150 jobs in the UK, including more than 100 at RAF Lossiemouth in northern Scotland. Boeing employees are already working alongside RAF personnel at the station in Moray, supporting the current fleet of five Poseidons.

“The P-8A Poseidon brings the RAF critical reconnaissance capabilities, and we are proud to be a trusted partner in helping to keep RAF aircrew trained, and the P-8A mission ready,” said Anna Keeling, managing director of Boeing Defence UK. “We are excited to see our continued growing presence in Scotland with the creation of these highly-skilled jobs, in addition to our existing footprint of more than 2,500 employees across the UK, reaffirming our commitment to help strengthen the aerospace and defence sector in Scotland.”

The RAF is on contract for nine Poseidon aircraft with five already delivered and the remaining four scheduled for later this year, when around 200 Boeing employees are expected to be based at RAF Lossiemouth focused on maintenance, training and support.

The second of two Operational Flight Trainers, jointly developed by Boeing and CAE for the Poseidon fleet, arrived at RAF Lossiemouth last month. Both will be installed in the Boeing-built Strategic Facility, which accommodates three Poseidon aircraft, squadrons and mission support facilities.

The P-8A Poseidon supports maritime surveillance, anti-submarine warfare and anti-ship warfare for the UK, and increases protection of the UK’s nuclear deterrent and Queen Elizabeth class aircraft carriers. More than a dozen UK-based suppliers produce components for the P-8, making up five percent of every P-8 aircraft around the world. Marshall Aerospace and Defence Group has built and delivered more than 900 auxiliary fuel tanks from its production facility in Cambridge.